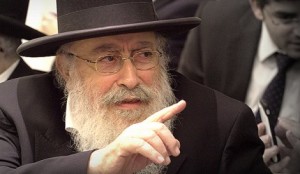 Some members of the Chief Rabbinate Council decided not to attend the official ceremony with Pope Francis in Heichal Shlomo and the Chief Rabbis of Israel. One of the rabbonim who did not attend is Rabbi Shimon Elitov Shlita. Rav Elitov spoke with Kikar Shabbos and explained his decision. In short, he stated “we cannot erase the bloody history”.

A total of four rabbonim from the Chief Rabbinate of Israel Council boycotted the papal visit at Heichal Shlomo. Among them were Migdal HaEmek Chief Rabbi Yitzchok Dovid Grossman Shlita, Tzfas Chief Rabbi Shmuel Eliyahu Shlita, and Rabbi Elitov Shlita. Rav Elitov was asked to address the event in the pope’s language, but he was adamant in his refusal despite the considerable pressure exerted on him to comply.

Rav Elitov explained “It is clear the chief rabbis had no choice and had to attend as part of what is done to maintain peace for Jews living around the world. On the other hand, to meet with him in my capacity as a member of the Chief Rabbinate Council, with the agency that represents that man, there is significance to such a meeting and we are prohibited from doing so as one representing Toras Moshe and as one raised on the history of all the blood spilling and suffering by Jews at the hands of this institution”.

As Rabbi Elitov continued his words, he speaks about how Chazal explain the gezeira that resulted for participating in Seudas Haman, reminding us they were invited by King Achashverosh and Jews in the Diaspora must attend for fear of angering royalty. The gezeira he explains was not because they attended, but because they enjoyed it to the point they could felt an integral part of the festivities.

He added he is confident the chief rabbis would deliver the appropriate message to the pope, and “remind him of the anti-Semitic campaigns that continue today in many Catholic countries in the world and until serious action will be taken by the same institution to uproot the hate and persecution of the Jewish people, we will demand this firmly and with determination and dignity as a rabbi in Israel must insist”.

Rav Elitov was Rav of Sukat David in Argentina, where the pope grew up.