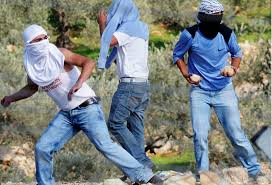 Coinciding with the completion of Friday afternoon Muslim prayer services on Har Habayis on 15 Sivan 5774, mispallalim at the Kosel were targeted with rocks being hurled from up above. Dozens of Arab terrorists began targeting mispallalim with rocks down at the Kosel. A commando police force stormed Har Habayis to stop the attacks.

According to a police report, 20 masked Arabs participated in the attacks. The force entered Har Habayis from the Mughrabi Gate. There are no reports of injuries.