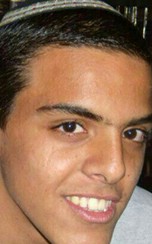 On his Facebook page, Hamas captive Eyal Yifrach, one of the three youths kidnapped by terrorists last week, posts his support for Gilad Shalit. Ironically, some three years after the June 2011 posting the tables have been reversed.

Five years Gilad has not hugged his mother

Five ears Gilad did not hear his father

Five years Gilad did not read a book

Five years he did not smell a flower

Five years Gilad did not laugh

If you care about him, and Gilad’s return is important to you

Dedicate five seconds on copy paste in status, Gilad, we miss you and hope you will return speedily!!!