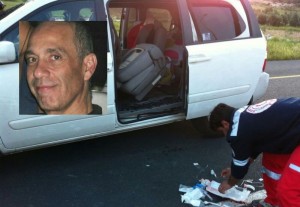 Police officials announced on Monday 25 Sivan 5774 that a terrorist was taken into custody in connection to the erev Pesach terrorist murder of Police Chief Superintendent Baruch Mizrachi HY”D.

Police announce that a Yomam commando force surrounded the home of the Hamas terrorist in Hebron and made the arrest. Ziad Awad, 42, from the village of Idna, is among the over 1,000 terrorists released by Israel in the Gilad Shalit prisoner exchange. Also taken into custody is his 18-year-old son Izzadin, who assisted him to flee and hide after the fatal attack.

Mizrachi and his wife and family were traveling near Tarkumiya Checkpoint on their way to Pesach seder when shots rang out. The 47-year-old senior Israel Police commander and Modi’in resident is survived by his wife who was pregnant at the time and three children.

Forensic experts operating at the scene of the fatal attack recovered tens of bullet shells and a magazine. They succeeded in lifting fingerprints from that magazine as well as DNA samples.