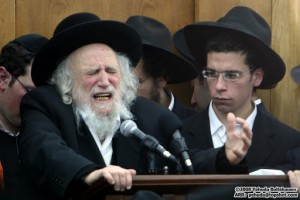 Assistant Editor of HaPeles R’ Yeshayahu Wein told Israel Radio that the Bnei Torah party in the city council has one vote in the chief rabbi race. Wein said that a deal is possible by which Bnei Torah will support Stern’s candidacy towards support for Rabbi Shlomo Moshe Amar Shlita would be supported as Sephardi Chief Rabbi.

Wein, whose newspaper represents R’ Auerbach’s faction of litvish chareidim told Israel Radio that a decision has not yet been made regarding any of the candidates and at present, they do not see any Ashkenazi candidate in the chareidi camp. He added that Rav Stern is a talmid chacham and there is a chance Bnei Torah will back his bid for the post. “We are looking for the candidate closest to our hashkafa. If Rav Stern agrees to protect the kashrus then we would consider voting for him”.

Rav Stern is the official dati leumi candidate and he enjoys the support of Bayit Yehudi as well as Jerusalem Mayor Nir Barkat.