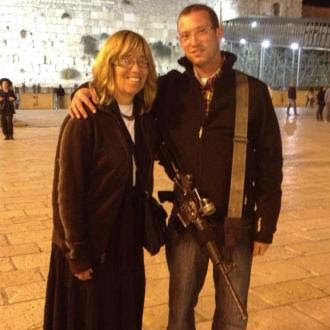 [Above Image: Yoni Oberstein with his mother,  Mrs. Faige Oberstein]

For budgetary and logistical reasons,  some of the brave soldiers of the IDF are lacking proper or optimal safety equipment. Sadly, the casualties are far too high already, and we want to do all that we can to provide protection that could avoid further loss of life R’L.

We have been in direct contact with Yoni, the son of Rabbi & Mrs. Oberstein of the Baltimore community, who is actively in service in Gaza. His answer to the offers for help from overseas  was clear, they need more bullet proof vests.

Yoni is currently in service as a member of the Chevra Kadisha, and along with his colleagues has the heartbreaking and dangerous task of entering hostile territory to retrieve and bring to burial any of our fallen brethren. Due to lacking resources, they, and many others, operate without bullet proof vests.

In coordination with commanding officers on the ground, we wish to raise funds to provide as many bullet proof vests as we can to the soldiers engaged in this dangerous and conflict.

Each vest costs approximately $1,534.00, and they are needed immediately. Please contribute generously. We are one people, and these are our brothers.

Rabbi Elchonon Oberstein, a prominent Rabbi in the Baltimore community has a son, Yoni, serving in the IDF. After being contacted by Rabbi Yissochor Dov Ecihenstein, Rav of Merkaz Torah U’Tefila, with an offer of support, the following are some excerpts from Rabbi Oberstein of the events that followed.

“Yoni said that no one would wear a vest if the others in their unit did not also have a vest. Secondly, he did tell me that the army is broke and can’t afford to provide them with vests. After some back and forth, he spoke to his MAGAD, which means the guy in charge, who was very enthusiastic that they desperately need them for Yoni’s unit. It is a matter of pikuach nefesh.

Yoni suggested that Rabbi Eichenstein speak directly to the MAGAD to work it out and he did. He just told me that by  3 AM he will have all the information from the army how to go about it legally and fast.

Now, to Yoni. He was in the infantry in the regular army but, in the reserves, they have made  him part of the Chevra Kaddisha. That means that whenever one of our Jewish boys is, Rachmana litzlan, killed, Yoni is part of the team that retrieves their body or body parts. He said he has slept 2 hours in the last 48. Tragically, there have been casualties. He already found someone he knew. He also said that the Arabs, yemach shemom, know that the Jews will come back so they lie in wait. It is a very dangerous job. They really need the vests, NOW! He says that today they received their first 13 and so they can only send in a squad of 13 at a time. They use trained dogs at night to help them.”

All funds collected will be pooled as one and forwarded to secure and deliver the protective equipment as quickly as possible.