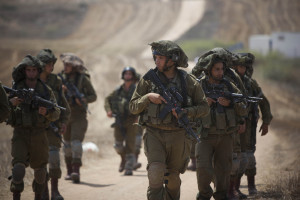 19:42: The IDF a short time ago killed five terrorists that exited a tunnel heading to a community in the Shar HaNegev Regional Council. Once again a massacre of Jews in that area has been averted B”H.

There are no causalities among the IDF force according to the preliminary reports. The area residents are instructed to remain locked down in their homes at this time as soldiers continue operating in an effort to make sure no other terrorists remain at large. Area roads are closed down as well.