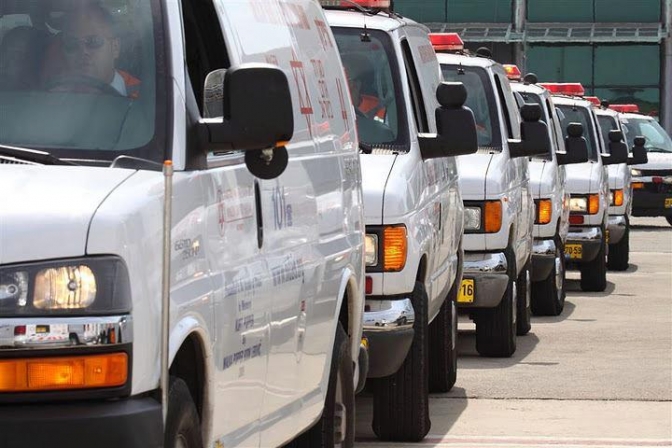 The wounded have arrived in the trauma center of Soroka Medical Center in Beersheva a short time ago. Some are listed in serious condition. At least four people have been killed in the mortar shell attack in the Eshkol Regional Council shortly after 6 PM on Monday, Rosh Chodesh Menachem Av.

The information cleared for publication is limited. At least ten people have been injured in the mortar shell attack. Four people have been killed. Chaim Yellin, the head of the Eshkol Regional Council has confirms that none of the dead or injured are residents of that regional council.

Sirens are continuing to wail at this time in the Beersheva and Eshkol Council districts. IAF fighter planes are seen overhead heading back to Gaza.

UPDATE: Israel Police had tens of traffic units blocking area roads to clear a path for ambulances transporting wounded from the mortar attack earlier. While four attack victims were transported by chopper, five were transported in ambulances.

Area roads are closed at this time to anyone without authorization. In essence, the area is a closed military zone. Police instruct well-intending residents not to bring anything to soldiers in the Gaza area at this time as roads remain closed due to the difficult security situation.

The terrorists were eliminated near Kibbutz Nachal Ohz.

Additional information will be provided as it becomes available.