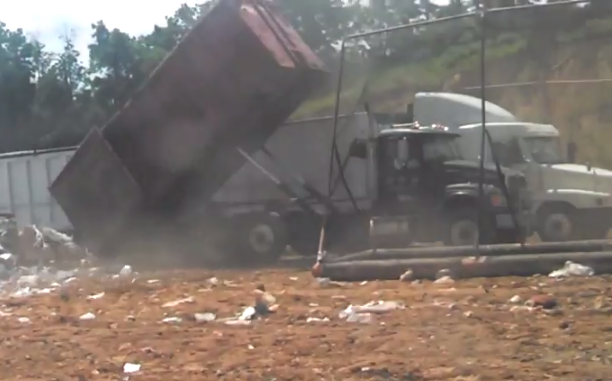 After months of research, Assemblyman Hikind (D-Brooklyn) revealed this morning that literally tons and tons of shaimos originating in the Tri-State area are ending up in a landfill in Pennsylvania, buried beneath dirty diapers and other refuse.

When reports of the landfill-shaimos operation reached Hikind, he met with leading community rabbonim to discuss the matter while immediately dispatching his staff to investigate. What Hikind discovered was far worse than he feared.

“This is no small operation,” said the Assemblyman. “Tons and tons of holy seforim and other shaimos are being hauled in by 18-wheel tractor trailers and dumped on a regular basis on top of garbage at a huge landfill in Pennsylvania. The shaimos are then covered with a six-inch layer of dirt, packed down, and then household garbage is placed on top, creating a virtual sandwich of garbage and shaimos, l’havdil. We believe this has been going on for as long as 15 years.”

Hikind discussed the matter with numerous rabbinical authorities including Rabbi Chaim Cohen, Rav of the Gur Shteibel and a dayan; Rabbi Shraga Hager, the Kosover Rebbe; Rabbi Nachman Yechiel Mendel Steinmetz, the Skwere Dayan; and Rabbi Yisroel Reisman, the Rav of Agudath Israel Zichron Chaim Tzvi and Rosh Yeshiva at Yeshiva Torah Vodaas. All of the rabbis unanimously agreed that the burial of holy shaimos in a landfill with garbage was shocking and disgraceful. Rabbi Steinmetz emphasized, “If shaimos is not treated properly, it can bring about a mahgaifah (a plague), chas v’sholom.”

“Our community is so very careful about the dignity of a single sefer,” said Assemblyman Hikind. “We teach our children at a very early age to kiss a sefer that is even dropped by accident and how not to desecrate shaimos. But, unfortunately, we have also been very trusting as a community when it comes to disposing of those bags and bags of shaimos that we all get rid of each year, typically around Pesach. Our neighborhoods fill up with trucks collecting shaimos. Most people don’t ask where their shaimos is going to end up—and when they do ask, no one seems to be able to give a straight answer.”

But Hikind insisted on learning the truth. Last April, just days after Hikind warned the community of potentially fraudulent shaimos collection and burial operations, garbage bags filled with holy books were found dumped upstate in Haverstraw, NY. “People were literally crying to think that they might have inadvertently given their holy shaimos to someone who could care less, who treated their shaimos like garbage,” said Hikind. “We worked to resolve that immediate problem but I’d been warning people for years to be careful about this.”

Over the last few years, large quantities of shaimos were found abandoned in both Boro Park and New Jersey, at which point Hikind worked with Rabbi Yosef Schwartz of Beth Genizah Olam, who volunteered to help the Assemblyman properly dispose of the abandoned shaimos.

“This new discovery may be the worst I’ve ever seen with regard to shaimos,” said Hikind. “The sheer volume is overwhelming—as many as 15 tractor trailers per years, each with a capacity of 80,000 lbs. of shaimos. And this continues at this very moment. When people see the video of what we discovered, I think they will be shocked and sickened.

“We cannot ignore this issue. People have the right to know how their holy shaimos is being disposed of when they’ve paid for that service. We hope that a plan will be put in place to minimally educate the community further regarding shaimos and its proper disposal. But all of the rabbonim that I spoke with are in total agreement that there has to be a better way.”