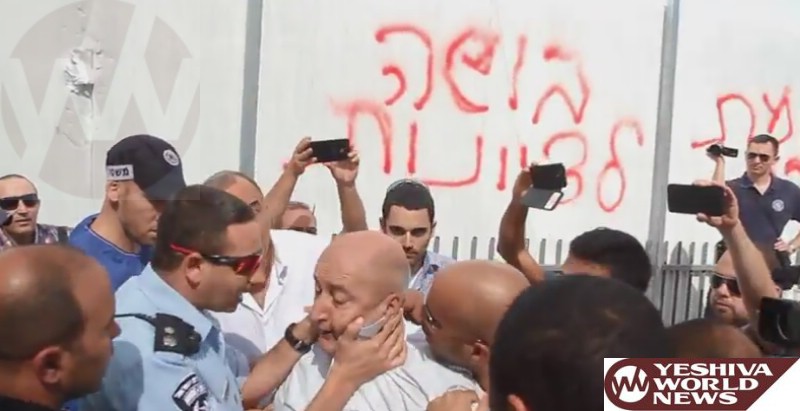 Dozens of girls from the Mishkenos Daas School were expelled from the school building in Beit Shemesh as the Ministry of Education and the Jerusalem Magistrate Court ruled they may not use the classrooms.

This occurred in Safot U’Tarbuot School in Beit Shemesh. It is a non religious school that can accommodate 500 students. At present there are only 144 students. Shortly before the school year began Beit Shemesh Mayor Moshe Abutbul gave four of the empty classrooms to the Mishkenos Daas School. A sheetrock partition was constructed to separate the frum and non-frum children. This elicited the ire of parents and community residents of the non-religious school, leading to the decision to ban the frum girls.

Some senior City Hall officials view the events as an anti-chareidi policy, nothing more, citing there are empty unused classrooms while the chareidi sector has nowhere for its children to attend school. There simply is not enough space they explain. The mayor and other members of the City Hall staff attended an urgent meeting on the matter on Tuesday night the eve of 8 Elul. Chareidi councilmen attended the meeting along with attorney Uri Kedar, who is representing City Hall in court on the matter. It was decided to erect a tent at the corner of Sorek and Micha Streets, not far from the school. That will become the temporary school for the girls, sending a clear message to the ministry, that the girls are compelled to learn in a tent while nearby classrooms remain unoccupied.

Chareidi Councilman Yeshayahu Ehrenreich who hold the city’s education portfolio, told Kikar Shabbos they will abide by the court’s ruling, which prevents them from using the classrooms until Thursday morning 9 Elul at 10AM. In Ehrenreich’s opinion, the court gives the appearance of acting against chareidim. “Today the children will learn in the streets since they do not have classrooms” he explained. He questions if the court would have acted in a similar fashion if the girls using the classrooms were not religious. “There is no way to explain the behavior” the councilman adds, calling the court’s ruling “political in nature”.

In his comments on the matter on Wednesday morning 8 Elul, Education Minister Shai Piron said “The ministry will not tolerate bullish behavior but will insist on dialogue and cooperation”.

The minister reiterated every child in Israel has the right to a proper education, but is not offering any solution for the girls who are not without a school. Minister Piron also called on police to use the full extent of the law against those who used violence to protest the events at the school.