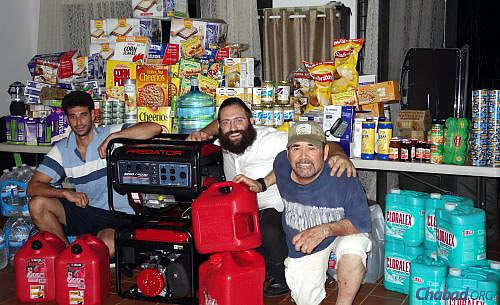 Police blockades, armed bandits, flooded roads and even a cracked axle couldn’t deter volunteers of Chabad Without Borders from bringing a truck of much-needed emergency supplies to the beleaguered Jewish community in hurricane-ravaged Cabo San Lucas, on the southernmost tip of Mexico’s Baja California peninsula.

“As soon as we found out that Cabo was affected so severely, I decided to send my truck with supplies,” says Rabbi Mendel Polichenco of Chabad Without Borders, which works to serve Jewish communities straddling the U.S.-Mexican border, specifically those in Tijuana, Mexico, and Chula Vista, Calif. “We were actually in the midst of moving to a new home just in time for Rosh Hashanah, but we put everything on hold.”

While Rabbi Yonah Fradkin, director of Chabad S. Diego Headquarters, procured large amounts of kosher chicken, meat, canned goods and other staples, Polichenco went to Costco to purchase water, solar chargers and other necessities. All the while, the rabbi says he was unable to communicate with those in Cabo, but “I used my common sense, and I was able to guess what I thought they would need.”

Once the relief goods—$5,000 worth of them—were in hand, the next challenge was to get them across the border. Since a limit exists on the amount of items a person may bring through, they crossed using three different vehicles—one driven by Rabbi Polichenco; one driven by his wife, Nechama Dina; and one driven by a community member.

Upon arriving at the Chabad center in Tijuana, the supplies were packed tightly onto Polichenco’s 4×4 pickup, which had been outfitted with jerry cans for gas. Two volunteer drivers—Larry Barnes and John Krasner—began the trip lateTuesday night.

Four hours into the almost 1,200-mile ride, the truck slipped off the road and an axel cracked; no one was hurt. Undeterred, Polichenco dispatched another vehicle with a replacement part. In addition, since limited communication had been re-established with Cabo, he was able to add specific supplies that had been requested, including old-fashioned telephones that don’t require electrical power.

By Thursday, the truck was repaired, restocked and ready to continue down the peninsula. All the while, the drivers were meeting people in cars and buses in the opposite direction who told them that the trip was impossible, and that they should turn back.

The Federal Police, which controls the roads, also told them the road was closed, and that they should turn back.

Despite the negative predictions, Polichenco says he urged the drivers to continue going, simply saying: “The families of the Chabad rabbi and rebbitzen in Cabo—Rabbi Benzion and Sonia Hershcovich—kept on asking what was being done, and I had faith that we would pull through.”

Finally, on Friday morning, just before Shabbat, the supply convoy arrived—and not a moment too soon.

Speaking via telephone from his home, which is now connected to a generator, Rabbi Hershcovich insists that Rabbi Polichenco is “really a lifesaver.”

“We were all alone and had no idea if people on the outside even knew what was going on here,” he says. “We’re so touched to know that he’d already sent over a truck with generators, food, water and other supplies even before we asked. When he first told me that he had sent a truck, I started bawling on the phone.

“And Larry and John are simply angels from heaven. They went through sheer terror and hell to get that truck down here. No one else managed to reach us, but they did.”

Rooms for Others Up North

Reporting on the general situation, the rabbi says police and other government workers have been doing an excellent job, righting telephone poles and rewiring them so that electricity can be restored in the next few days.

For his part, Hershcovich is distributing cold water and other snacks to the workers, bringing them some much-appreciated relief. He is also taking food down to the barrios, the city’s poorest neighborhoods.

Many community members, including the rabbi’s wife and three children, have been relocated to La Paz, Mexico, some 100 miles to the north, where Rabbi Alexander and Esther Piekarski, co-directors of Beth Yona-Chabad Jewish Community of La Paz, Mexico, have opened up their home.

“Together with a few others, they have been at our home since late Thursday evening, and even more people from Cabo joined us for the Shabbat meals,” says Rabbi Piekarski. “On Rosh Hashanah, we anticipate having a significant Cabo contingent for prayers and festive meals at the Beth Yona Chabad Center.”

Hershcovich plans to join his family there for the holiday and rent rooms so that the remaining community members can be there as well.

And he has another reason to be in La Paz—his wife is expected to give birth to their fourth child any day now. 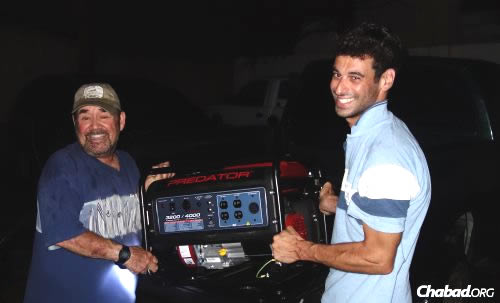 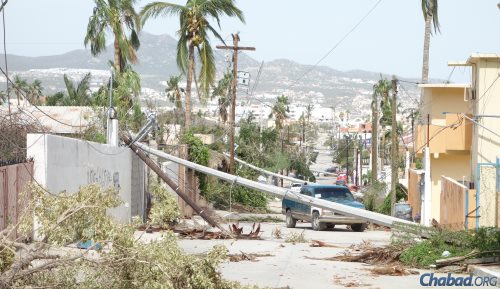 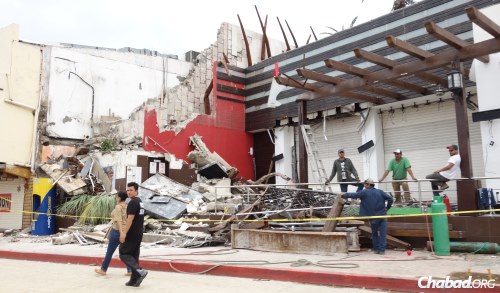 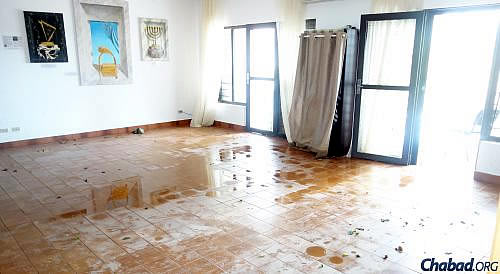