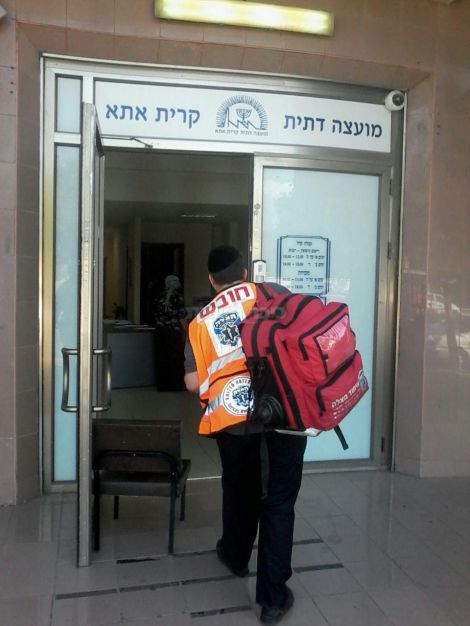 Employees in the Kiryat Ata Religious Council admit that relations between the city’s Sephardic Chief Rabbi and his Ashkenazi counterpart have not been good. However, on Wednesday morning 7 Tishrei, days before Yom Kippur, things took a sharp turn for the worse R”L.

Rafi Alouz, who heads the city’s kashrus department spoke with Kikar Shabbos detailing the background leading to the unfortunate event that occurred on Wednesday morning. He explained an agreement was reached with the Ministry of Religious Services pertaining to a division of responsibilities with Rabbi Maimon overseeing mikvaos and Rabbi Diskin dealing with kashrus. This has been the case for the past four years and the arrangement was more or less successful.

Alouz continues, explaining in the last year Rabbi Maimon decided that he too wishes to sign teudot kashrut and all efforts to avoid a confrontation failed. It was suggested that he would sign half of the city’s kashrus certificates and Rabbi Diskin the remaining half but he refused to recognize Rabbi Diskin’s authority.

Alouz explains that on Tuesday 6 Tishrei Rabbi Maimon phoned him after not speaking with him for a year, asking to sign off on the teudat kashrut for a particular restaurant in the city. “I told him that if it will lead to peace, sign on my forehead too. Tomorrow I will come in early and sign on the teudat kashrus and all will be well” explained Alouz. He added that Rabbi Diskin was apprised of the situation and agreed. He quoted Rabbi Diskin saying “If it will bring peace let him sign all of the certificates”.

Wednesday came and the request that was made on the phone turned into a verbal assault against persons working in the city’s kashrus division. The rav came in shouting “where are the teudot kashrut?” Efforts to calm Rabbi Maimon failed and the rav began shouting as he called a number of people, summoning them to the office, including a mashgiach for the restaurant in question.

The rabbi then turned his wrath at a secretary who is working in the religious council for the past 14 years demanding the teudot kashrut immediately. She responded “HaRav, I will bring them to you in a few moments”. The rav lost it and begin shouting “I will kill you and Rav Diskin. I will get rid of all of you. No one will tell me what to do!”

He then began to turn over table and throw chairs as the situation took an abrupt sharp turn for the worse. Alouz grabbed Rabbi Diskin and placed him in another room to distance him – concerned for his safety. He pushed the secretary away as well. Rabbi Maimon was shaking and in an uncontrollable rage, requiring medical attention.

Alouz concluded that for him the chilul Hashem was most painful, adding “I have the utmost respect for Rabbi Maimon but this was simply too much”. He added that a couple from the USA was scheduled to arrive to process their papers to get married but he headed them off to avoid them seeing the horrific chilul Hashem.