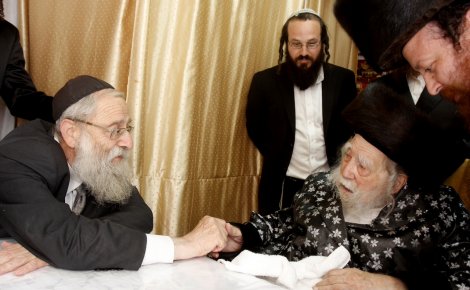 The Erlau Rebbe Shlita, who serves as president of the Agudas Yisrael Moetzas Gedolei Yisrael, surprised many with his announced backing of Rabbi Aryeh Stern Shlita, the dati leumi community’s candidate in the Jerusalem Chief Rabbinate race.

Rabbi Stern visited the rebbe on Monday morning 19 Tishrei. The rebbe told him “Hatzlacha running the Yerushalayim Rabbanut as is fitting for Yerushalayim”. Rabbi Stern thanked the rebbe for his support and asked to consult with the rebbe if he is elected to the post in the election, which is scheduled to take place on 23 Tishrei.

The other admorim in the Agudas Yisrael Council have indicated they are backing Rabbi Moshe Chaim Lau Shlita in his bid to become the next Ashkenazi Chief Rabbi of the capital.