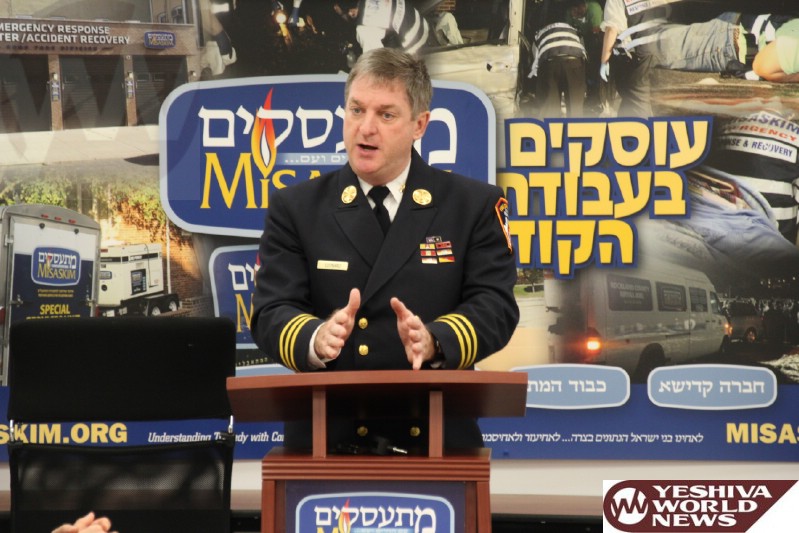 “Chief Leonard’s exemplary service as a firefighter and fire officer, along with his extensive field experience and leadership as a chief officer and incident commander, makes him a great choice to serve as Chief of Department,” said Commissioner Nigro. “I am confident he will work hard to improve our fire and EMS operations, while ensuring the safety of the brave men and women under his command who selflessly serve our city.”

“It’s a tremendous honor to have been selected to serve as Chief of Department in the world’s greatest fire department,” said Chief Leonard. “I feel lucky and privileged at having already had an incredible career with the FDNY, and I’m excited and eager to help the Commissioner and Mayor de Blasio achieve even greater success for the Department in the years to come.”

Chief Leonard began his career in 1979, first assigned to Engine Company 310 then Ladder Company 174, housed together in Flatbush, Brooklyn. In 1986, he was promoted to Fire Marshal and assigned to the “Red Cap” street patrol in East New York, Brooklyn, which was created to fight the arson blight that had plagued parts of the city at that time. In 1987, he returned to firefighting serving on Staten Island with Ladder Company 85, and was promoted two years later, in 1989, to Lieutenant and assigned to Ladder Company 168. Following his promotion to Captain in 1993, he returned to Brooklyn to lead Engine 243 in Bensonhurst. Following his promotion to Battalion Chief in 1996, he served at Battalion 31 in Brooklyn, Battalion 22 in Staten Island and Battalion 2 in Manhattan. In 2002, he was promoted to Deputy Chief and worked in Division 8, which covers Staten Island and southern Brooklyn.

In 2010, Chief Leonard was appointed Deputy Assistant Chief and assigned as Brooklyn Borough Commander, with overall responsibility for the Department’s largest field force by borough with more than 75 units and 2,000 firefighters and fire officers. He also responded citywide to all major emergencies while serving simultaneously as a Citywide Tour Commander, including as the Incident Commander at the March 12, 2014, explosion and collapse in East Harlem.

During Hurricane Sandy in October 2012, Chief Leonard supervised all fire operations and response in Brooklyn as Borough Commander.

He has been cited four times for bravery, including two unit citations and two acts of heroism in Brooklyn. In 1982, he saved three brothers from a fire on Kings Highway, and, in 1990, while off-duty, he saved a woman from a fire on Brooklyn Avenue. He is also credited with three pre-hospital saves of patients experiencing cardiac arrest.

Chief Leonard holds an associate’s degree in Criminal Justice and a bachelors in Sociology – both from St. Francis College; and a MS degree in Fire Protection Management from John Jay College. He has participated in the FDNY Officers Management Institute (FOMI) and the Department’s Advanced Leadership Course. Born in Brooklyn, Chief Leonard is a lifelong resident of New York City and currently lives on Staten Island with his wife, Patricia.