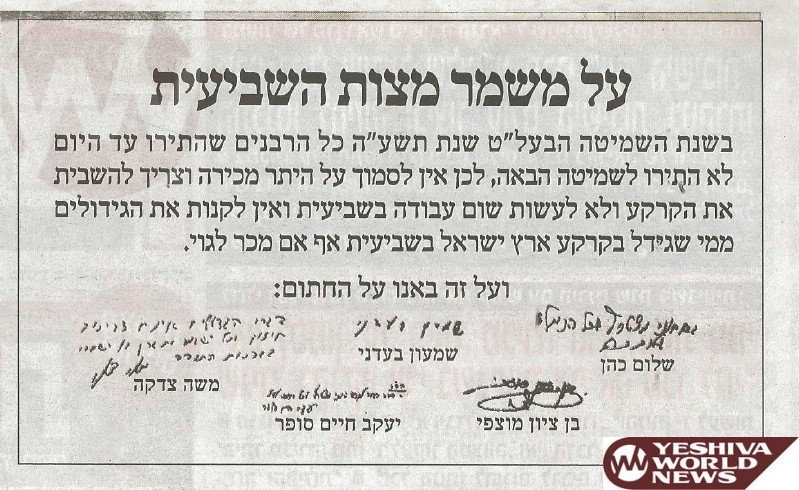 The head of the Shas party Moetzas Gedolei Yisrael Chacham Rabbi Shalom Cohen Shlita responded to the as appearing in the Tuesday 18 Marcheshvan Yated Neeman. The ad signed by prominent Sephardi rabbonim/poskim including Rav Cohen spoke out in no uncertain terms against heter mechira. The rabbonim whose names appeared notified the media on Tuesday they never signed such a letter.

Later in the day Rav Cohen released a statement regarding the Yated publication. He reiterated that he never signed such a letter. Persons close to the rav report he was angered over the use of his name in that capacity. The Rav on Tuesday evening met with Shas faction members of the Ashdod City Council and he used the forum to express his anger over the Yated incident. He directed his anger in the direction of Degel Hatorah. “Yated Neeman is crazy. Why would they publish this” he is quoted saying.

In an interview on Kol Berama Radio Tuesday evening, Yated Manager Zelig Orlansky insisted the letter was genuine, adding he has the original in his possession, adding Yated would not publish anything in the names of Gedolei Yisrael without first obtaining their permission.

Yated took an excerpt from the letter and published it for the tzibur at large, not just for farmers. Yated took the letter out of context and that is why the rabbonim insisted they never signed such a letter, aware they signed a longer version which was not intended for the general public.

Kol Berama adds they contacted some of the rabbonim again today, Wednesday, 19 Marcheshvan, and they stated emphatically it was understood the letter they did sign was exclusively for farmers and not for publication. They conclude that if they knew the letter would make its way to the media they would have refused to sign. In addition, they explain and Kol Berama confirms Yated omitted the signatures of the Ashkenazi rabbonim who also signed the letter to make it appear this was a chiddush by the Sephardi poskim against the heter mechira psak of Maran HaGaon HaRav Ovadia Yosef ZT”L.

When asked why they did not release a clarification, some of the Sephardi rabbonim explained “They already played with the letter and our signatures and therefore we do not trust Yated to publish a clarification”.