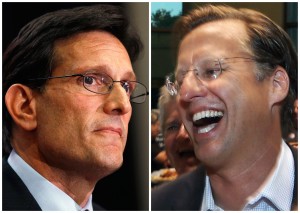 Dave Brat, who upset House Majority Leader Eric Cantor in the Virginia GOP primary this year, was sworn in Wednesday evening to finish out the remainder of Cantor’s term.

“Throughout my campaign, as President Reagan said, I tried to appeal to people’s best hopes, and not their worst fears,” Brat said in a brief speech to the House after his swearing in. He said he focused on solutions, especially on economic issues, and that’s how he’ll approach his responsibilities as lawmaker.

Adams became the 100th voting member of the current Congress on Wednesday night, and she paid homage to the women who came before her.

Florida Rep. Debbie Wasserman Schultz, who chairs the Democratic National Committee, noted in a statement that a century ago, “women were still fighting to be guaranteed the right to vote; today is a historic milestone in the progress we have made. As a woman, a mother, and a member of Congress, I am encouraged to see more women making their voices heard and taking their seat at the table.”

The three new members received raucous applause from their fellow representatives, as well as from supporters and family members who packed the galleries.

Brat rode a wave of tea party support in June to upset Cantor, who was the second-ranking member of the House. Cantor had been widely considered a likely successor to House Speaker John Boehner. Following his resignation, Cantor took a job with a New York investment bank.

In the campaign, Brat labeled Cantor a supporter of amnesty for immigrants who are in the country illegally. Cantor initially backed limited legislation to help young people who came to the U.S. illegally as children, but argued he was a staunch opponent of amnesty.

It will be the first public office for Brat, formerly a professor at Randolph-Macon College in Ashland, Virginia. His only previous campaign was a failed bid for the GOP nomination for a state House of Delegates seat.