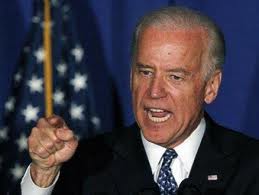 U.S. Vice President Joe Biden criticized Russia on Friday for its role in eastern Ukraine, urging Moscow to uphold a cease-fire in the war-torn region as he visited Kiev on the anniversary of the country’s anti-government protests.

Touring the Ukrainian capital, Biden said Western sanctions against Russia would not be lifted until Moscow does more to enforce the cease-fire. Over 900 people have been killed and fighting has continued in eastern Ukraine since a truce began in September, and the conflict has claimed at least 4,300 lives since April, according to the U.N.

“If Russia were to fulfill these commitments and respect Ukrainian sovereignty and territorial integrity, we could begin a rational discussion about sanctions,” Biden said. “But that’s not what has happened. Instead we’ve seen more provocative actions, more blatant disregard for the agreement … And as long as that continues, Russia will face rising cost and greater isolation.”

Biden stopped short of announcing that the United States would provide lethal military aid to Ukraine, an idea floated by an adviser to President Barack Obama. The United States has given Ukraine $53 million in non-lethal aid.

The protests that began a year ago in Kiev led to the ouster of Ukraine’s former pro-Russian president in February. Russia then annexed the Black Sea peninsula of Crimea in March and began backing a pro-Russian insurgency in eastern Ukraine.

The U.S. vice president, touring with his wife, praised the sacrifices of “brave Ukrainians who are even now defending against Russian aggression in the east.”

Some Ukrainians have been more critical of the new Kiev government. Earlier Friday, Ukrainian President Petro Poroshenko and Prime Minister Arseniy Yatsenyuk were shouted down when they visited the central Kiev square where over a hundred protesters were killed by sniper fire in February.