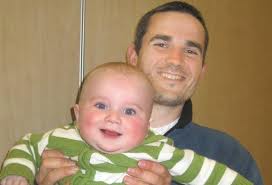 The terrorist convicted of the rock-attack that resulted in the fatal erev Rosh Hashanah crash that claimed the lives of Asher Palmer HY”D, 25 and his infant son Yonatan HY”D has been sentenced to two life prison terms. The attack occurred on erev Rosh Hashanah 2011 near Kiryat Arba. Mr. Palmer was struck in his face with a stone, lost control of the vehicle, which crashed and flipped as a result.

Haaretz reports the court felt “the time has come to set new punishment” for such heinous crimes. The limit for punitive compensation in Israel is 258,000 NIS in such cases but since this occurred Yehuda, not inside Green Line Israel, the court used the opportunity to send a message. As such, the terrorist is also compelled to make the compensatory payment of 3.5 million shekels to the bereaved family.