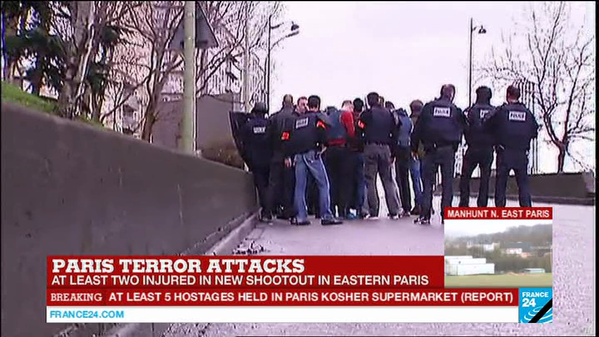 Terrorists linked to each other seized hostages at two locations around Paris on Friday, facing off against hundreds of French security forces as the city shut down a famed Jewish neighborhood and scrambled to protect residents and tourists from further attacks.

France has been high alert for more attacks since the country’s worst terror attack in decades – the massacre Wednesday in Paris at the satirical newspaper Charlie Hebdo that left 12 people dead.

The two sets of hostage-takers apparently know each other, said a police official who was not authorized to discuss the rapidly developing situations with the media.

The Paris mayor’s office immediately announced the closure of all shops along Rosiers Street in the city’s famed Marais neighborhood in the heart of the tourist district. Hours before Shabbos, the street is usually crowded with shoppers – French Jews and tourists alike. The street is also only a kilometer (.06 miles) away from Charlie Hebdo’s offices.

Two brothers linked to al-Qaida grabbed a hostage early Friday and were cornered by police inside a printing house in Dammartin-en-Goele, northeast of Paris. They are believed responsible for the attack that decimated Charlie Hebdo’s staff and left two police officers dead.

In addition, the police official said a gunman holding at least five hostages Friday inside a kosher grocery store in eastern Paris is believed responsible for the roadside killing of a Paris policewoman on Thursday. Authorities released a photo of him and a female accomplice but were unclear about her whereabouts.

At the store near the Porte de Vincennes neighborhood, the gunman burst in with gunfire just a few hours before the Jewish Sabbath began, declaring “You know who I am,” the official recounted.

Police SWAT squads descended on the area and France’s top security official rushed from to the scene, as he did the day before when the policewoman was killed. The attack came before sundown when the store would have been crowded with shoppers.

Paris police had released a photo of Amedy Coulibaly and a second suspect, a woman named Hayet Boumddiene, who the official said is the market gunman’s accomplice. Police said 100 students were under lockdown in schools nearby and the highway ringing Paris was closed.

Hours before and 40 kilometers (25 miles) away , a convoy of police trucks, helicopters and ambulances streamed toward Dammartin-en-Goele, a small industrial town near Charles de Gaulle airport, to seize the Charlie Hebdo suspects, who had hijacked a car in a nearby town after more than two days on the run.

“They said they want to die as martyrs,” Yves Albarello, a local lawmaker who said he was inside the command post, told French television station i-Tele.

One of the suspects in the Charlie Hebdo killings, Cherif Kouachi, 32, was convicted of terrorism charges in 2008 for ties to a network sending jihadis to fight U.S. forces in Iraq. A U.S. official said his 34-year-old brother, Said, had visited Yemen, although it was unclear whether he was there to join extremist groups like al-Qaida in the Arabian Peninsula, which is based there. Witnesses said he claimed allegiance to the group during the attack.

Both were also on the U.S. no-fly list, a senior U.S. counterterrorism official said. The American officials also spoke on condition of anonymity because they were not authorized to discuss foreign intelligence publicly.

Nine people, members of the brothers’ entourage, have been detained for questioning in several regions. In all, 90 people, many of them witnesses to the grisly assault on the satirical weekly, were questioned for information on the attackers, Interior Minister Bernard Cazeneuve said.

With the brothers trapped, Charles de Gaulle closed two runways to arrivals to avoid interfering in the standoff or endangering planes.

Authorities evacuated a school near the CTF Creation Tendance Decouverte printing plant around midday Friday after the suspects agreed by phone to allow the children safe passage, town spokeswoman Audrey Taupenas told The Associated Press. About an hour later, an AP reporter counted nine large, empty buses headed toward the area, apparently to evacuate the children.

Taupenas said there appeared to be one hostage, a number confirmed by a police official on the scene who was not allowed to discuss the operation.

A man who said he had his car stolen early Friday told Europe 1 the first man who approached him had machine gun and the second man had a gun “with a kind of grenade at the end.”

Tens of thousands of French security forces have mobilized to prevent a new terror attack since the assault on Charlie Hebdo, which decimated its editorial staff, including the chief editor who had been under armed guard after receiving death threats for publishing caricatures of the Prophet Muhammad. He and his police bodyguard were the first to die, witnesses said.

“There is a lot of fear,” he said, adding everyone he knew was staying home with their doors and shutters closed. “We’re scared. The schools are being evacuated.”

Charlie Hebdo had long drawn threats for its depictions of Islam, although it also satirized other religions and political figures. The weekly paper had caricatured the Prophet Muhammad, and a sketch of Islamic State’s leader was the last tweet sent out by the irreverent newspaper, minutes before the attack. Nothing has been tweeted since.

Eight journalists, two police officers, a maintenance worker and a visitor were killed in the attack. Charlie Hebdo planned a special edition next week, produced in the offices of another paper.

Authorities around Europe have warned of the threat posed by the return of Western jihadis trained in warfare. France counts at least 1,200 citizens in the war zone in Syria – headed there, returned or dead. Both the Islamic State group and al-Qaida have threatened France, home to Western Europe’s largest Muslim population.

The supermarket where the second siege is understood to be taking place is Rue Albert Willemetz, a side street off the main intersection of porte de Vincennes and Boulevard de la Peripherique, writes Shiv Malik.

From photos on Google maps, the supermarket appears to be a fairly nondescript one story dark grey building with Hyper Cacher – roughly translated as Super Kosher – emblazoned on the side of the building. It sits next to a petrol station and a deli and is located at the base of a tower block. 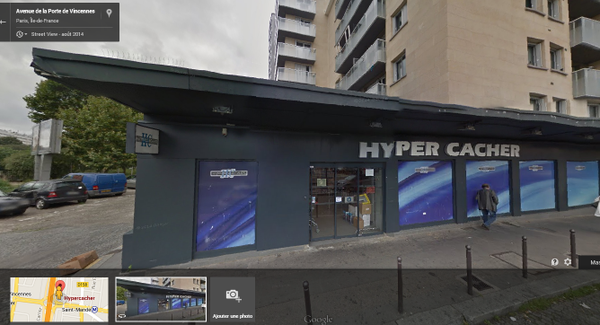 IDF Reservists To Assist In Corona Wards In Hospitals

Three Coronavirus Hotels Open, One to Cater to Chareidim