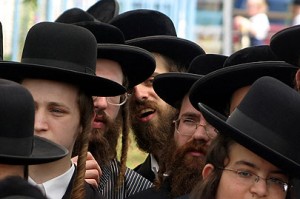 Channel 10 Evening News is running a documentary including a number of segments which sends a clear message – if the chareidim and Arabs do not begin working, the nation is headed for economic collapse.

In the Monday night 28 Teves segment, the report quotes data from the Central Bureau of Statistics (CBS) which reports there are one million chareidi poor in Israel today. The Channel 10 report adds that if the trend is not reversed, the nation is headed for economic disaster for the working class can no longer continue paying taxes and carrying the chareidi burden.

The report visits with a Bnei Brak yeshiva and speaks with avreichim and talmidim who explain their dedication to limud Torah. They are not concerned when asked about learning English, math and other secular subjects. 22-year-old Eliyahu Dagan explains “we rely on HKBH. Eliyahu admits he and his colleagues do not study English, philosophy or other secular subjects. Others have the same response. Some explain their wives work, but earn a minimum amount, 1,000-2,000 NIS monthly.

Avreichim explain their wives work and they are quite fine living on their limited incomes. A visit to a local shteitel shop and a talk with one such wife confirms this as being so.

I take care of you because I work all day, every day. You say you too pay taxes but not the same. You do not pay income tax because you do not work and even if your wife works, her salary is too low to be taxable.

The report ads that Professor Dan Ben-David of Tel Aviv University reports that back in 2005, the breakup of a classroom was;

The professor explains the chareidi growth rate is the highest and the numbers are indeed troubling.

Channel 10 then visits the Degel Hatorah office and speaks with Rav Menachem Blau of the Mishmeres Kodesh. R’ Blau agrees to speak in his own name and not that of the party. He explains that the facts are presented are untrue and many chareidi women are indeed earning a living.

Local chareidi journalist Uzi Barak took Channel 10 around for a firsthand view of chareidi Bnei Brak and the lifestyle. Channel 10 cannot understand how the situation will be tenable in 10 or 20 years.

They speak with Rav Dov Povarsky who explains “limud Torah is not a new invention and this is how the Jews lived”.

R’ Blau adds that he does not see the same dire situation that Channel 10 describes, adding that while Bnei Brak may be the poorest city in Israel according to the CBS, it is the happiest and the one where families are thriving. Blau adds in Bnei Brak the chareidim live on their income and make it work, explaining their lifestyle and beliefs do not surround financial wealth.

Journalist Barak then takes the journalist Daniel Basach and his camera crew to a clothing gemach for avreichim where one buys new clothing at sharply reduced prices. They try to explain the community takes care of its own and makes it work. The store owner insists there is a gemach for everything and Bnei Brak is the happiest city in the country.

The next stop if the beis hatavshil (soup kitchen) run by Rav Simcha Korovsky, where a hot meal is offered to anyone for 1 shekel. Rav Simcha too explains how residents are pleased with their lifestyle.

Daniel did find one chareidi resident who was bold enough to tell the camera that he receives unemployment because he is eligible and he can. “I want to milk the state for if I do not take the money it goes to the Bedouins or elsewhere. The government has stolen our budgets and gives us nothing”.

R’ Blau then attempts to straighten Daniel out. “We are keeping you alive and supporting you and it is not you who sustains us as you believe”.

Can you read English? Does anyone know English?

It may serve a purpose to read the instructions on a package of batteries but it is not essential. Limud Torah is essential.

The report adds that over the last ten years, the number of chareidim committed to learning has dropped, but not sufficiently. It adds that while once only 30% of chareidim did not earn a bagrut, that number is now over 50% and this is worrisome since “they are not employable”.

They then meet with Rav Pini Gross, who runs a school for chareidim wishing to enter the workplace, teaching English and other subjects to permit them to find employment. His team is also in contact with perspective employers seeking to arrange shidduchim since even if a chareidi wants to work, not everyone will hire him.

Channel 10 concludes that even if more chareidi men are working, they are in the minimum wage bracket and therefore, they are not paying income tax. He concludes the Bank of Israel states if the chareidim would work in the same numbers as others in society, it would generate an additional 50 billion shekels annually.