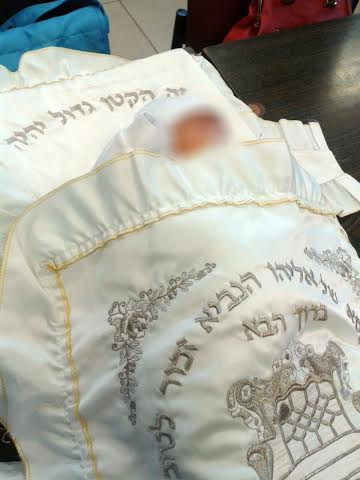 A moving ceremony was celebrated recently at Yad L’Achim; the bris milah of a baby born to a young woman rescued by the organization from an Arab village. Making the ceremony even more poignant is that it succeeded in reuniting the woman and her parents for the first time since she left home to marry an Arab.

The joyous mother, Ahuva*, 25, was overcome by tears. She was reconnecting to her family and her people, in a process that began just a few months earlier when she contacted Yad L’Achim to ask for help.

The woman, Ahuva, had gone through years of personal turmoil, including a very difficult period as the wife of an Arab. This final step led her parents to complete sever ties with her.

“After her rescue, she shared with me her great pain over the loss of her family,” said a Yad L’Achim social worker who was assigned to Ahuva immediately after the rescue. “The family had been furious with her and she was too embarrassed to approach them and ask about reestablishing ties.

“As difficult as things were for her during her pregnancy, she was determined to hold a bris for her son, to bring him to the Covenant in accordance with Halachah…

“From the moment Ahuva contacted Yad L’Achim, we’ve been at her side, helping meet her every need. Once the baby was born, it was only natural for us to help realize her dream of celebrating a bris milah.”

But Yad L’Achim knew it wouldn’t enough to arrange the mohel and the meal. The ceremony wouldn’t be complete for Ahuva if her family wasn’t there to celebrate with her.

The social worker approached the parents and informed them of the birth of the boy and of the upcoming bris. “She has cut off all ties with the Arab and asks with all her heart that you attend the bris and act as the sandak,” the social worker implored the father.

They broke down and came. Not just the father and mother, but the entire family.

The high point of the ceremony came when the father, wrapped in a tallis and sitting in the chair of the sandak, placed his hands over his daughter’s head and gave her a brachah. There wasn’t a dry eye in the house.

“This just goes to show to what extent the Gates of Teshuvah (repentance) are not locked”, said a senior Yad L’Achim official. “It also shows that the Gates of Hope are wide open both for the women trapped in Arab village and those who are engaged in the holy work of helping rehabilitate them”.