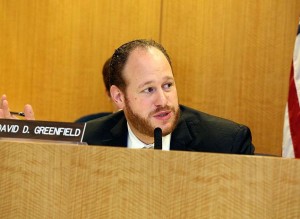 Less than five days after Pro-Palestine protesters heckled the New York City Council’s commemoration of the 70th anniversary of the liberation of Auschwitz-Birkenau, Councilman David G. Greenfield’s impassioned response to their “naked, blind anti-Semitism” has gone viral and was viewed well over one million times across the globe.

Last Thursday afternoon, dozens of Pro-Palestine protesters seated in the New York City Council gallery waited through nearly an entire session of the Council’s meeting to attack Council Members exactly during the Council’s memorial for the 1.1 million victims of Auschwitz. While the Holocaust memorial resolution was being discussed, the protesters jumped out of their seats, unfurled a Palestinian flag and started shouting insults and abuses at the Council Members. The protesters also heckled Council Members by name, yelling about the Council’s upcoming trip to Israel sponsored by the Jewish Community Relations Council and the UJA-Federation. Greenfield, the grand-son of Holocaust survivors, wasted no time in responding to the hecklers in what has since been termed an “epic take-down” of the anti-Semitic protesters.

After the protesters unfurled a Palestinian flag followed by a volley of shouts and insults during the Council’s Holocaust commemoration, Councilman Greenfield raged, “do you want to know know why they are angry? Do you want to know why they are unfurling that flag today? Because Hitler did not finish the job. He only wiped out half of my family. And only by the grace of G-d is the other half, me, the grand-child, still alive today.”

Many of Greenfield’s colleagues stood in solidarity with his remarks and several including Council Members Mark Weprin and Eric Ulrich also denounced the hateful protesters. Council Member Corey Johnson said that the protests were “disrespectful and offensive” and “simply awful.” Council Speaker Melissa Mark Viverito explained that “at a time when the Council was voting on a resolution commemorating the 70th anniversary of the liberation of Auschwitz, this outburst was offensive, outrageous and counter to the values of the City Council.”

The link to Greenfield’s viral speech is below as is a written transcript of his impromptu remarks. Today is International Holocaust Memorial Day and is exactly 70 years to the day of the liberation of Auschwitz-Birkenau.

Councilman David Greenfield’s remarks on the floor of the New York City Council on Thursday, January 22, 2015: “Thank you Madam Public Advocate. You know, I waited my turn here. I’ve followed protocol in the New York City Council and haven’t spoken out because I respect this chamber. I have to tell you, I’m still shaken to my core. I am upset. I am angry. But I’ll tell you honestly, I am actually somewhat pleased at what we saw here today. If you’re wondering why I’m saying that, it’s because for the last few weeks we’ve heard from people who said, “Oh we don’t dislike Jews, we only dislike the state of Israel. We have no problem with you, we simply don’t want you to go to Israel.”

But we know that’s not really at the core of what they were saying and today they proved it. While we were discussing a resolution regarding the murder of 1.1 million human beings – I will point out that 90% of whom were Jewish, but the other 10 percent were political dissidents, they were Jehovah’s Witnesses, they were gays. Those were the people who were being killed together in Auschwitz-Birkenau. While we were discussing that, they had the nerve, the chutzpah, the temerity to unfurl a Palestinian flag and to yell at us while we’re discussing that.

And that’s why we go to Israel. We go to Israel to make a message that is clear: that we will not be cowered by this fear and by this hatred that we have, where these are people who will celebrate the death of Jews rather than mourn the death of innocents. I am embarrassed at what happened here today but I am pleased that we finally see what this is all about: good old fashion Anti-Semitism. Thank you.”