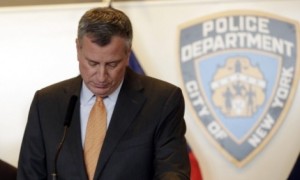 Mayor Bill de Blasio is taking a very different tact in reacting to the latest grand jury decision about a death at the hands of a New York City police officer.

He was emotional and pained in December when a Staten Island grand jury declined to indict an officer for placing Eric Garner in a fatal chokehold.

But he was cool and restrained last week when an officer who shot Akai Gurley in a darkened stairwell was indicted on manslaughter and other charges.

That tone may have helped maintain a tentative truce between City Hall and the police unions who criticized the mayor for his remarks following Garner’s death.

A senior aide to the mayor says de Blasio’s public remarks about any issue are calibrated “according to context and circumstances.”