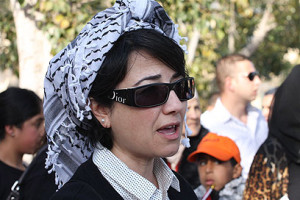 A special panel of nine Supreme Court justices convened on Wednesday, 29 Shevat, to hear the appeals from Yachad party candidate Baruch Marzel and Arab MK Hanin Zoabi. The two were disqualified from running in the 20th Knesset race by the Central Election Committee. The court vote 8-1 to reverse the decision. Justice Elyakim Rubinstein was the dissenting voice.

“There are Jews who love Eretz Yisrael, Toras Yisrael, the State of Israel, and the IDF, and there is one who wishes to destroy the state and fight against the Jewish country, and therefore, my joy is not complete”.

He explained he hoped the court would wipe the smile from Zoabi’s face, but this did not occur.

Eli Yishai praised the court’s ruling, telling the media he is pleased that Marzel remains on the ticket. When asked about Zoabi, he told the media “It is shocking to me that one who injured IDF soldiers during the Marvi Marmara will be sitting in the 20th Knesset. She challenges Israel’s sovereignty daily with each passing hour”.