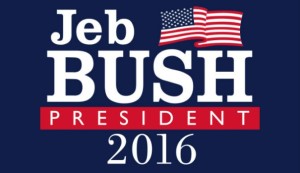 Former Florida Gov. Jeb Bush said Wednesday that “there were mistakes made in Iraq” during his brother’s administration, offering the critique during a wide-ranging speech on foreign policy that comes as part of his run-up to a likely presidential campaign.

Speaking to the Chicago Council on Global Affairs, Bush said during a question-and-answer session after his speech that intelligence about Saddam Hussein’s possession of weapons of mass destruction was not accurate, and the U.S. initially failed to create an environment of security in the country after removing the Iraqi leader from power.

But Bush praised former President George W. Bush’s decision to “surge” troops into Iraq in 2007, which added roughly 20,000 troops to the American forces in the country in an effort to improve security. He called it “one of the most historic acts of courage politically” of any president.

The surge was “hugely successful,” Bush said, and it created a “a fragile but more stable situation” in Iraq that President Barack Obama could have built on during his term in office.

Bush offered harsh words for Obama’s foreign policy during the speech, calling his administration “inconsistent and indecisive” and one that has led the U.S. to lose “the trust and the confidence of our friends.”

“The great irony of the Obama presidency is this: Someone who came to office promising greater engagement with the world has left America less influential in the world,” Bush said.

Bush acknowledged during the speech that his views about America’s place in the world will often be compared with those of his brother and father, former President George H.W. Bush, adding he is “lucky” to have had family members who have “shaped America’s foreign policy from the Oval Office.”

“But I am my own man — and my views are shaped by my own thinking and own experiences,” he said. “Each president learns from those who came before — their principles, their adjustments.”

The older Bush brother finished his second term in 2009 amid an unpopular war in Iraq, an economy in freefall and with a majority of Americans disapproving of his job performance.

Among donors, Jeb Bush has noted a strong family and religious bond with his older brother, but has also said they are not clones and have differences common among siblings.

Ahead of the speech, Bush aides also released what they called a preliminary group of experts who will provide him with foreign policy advice. They included familiar names, such as James Baker III and George Shultz, both secretaries of State under President Ronald Reagan; former Homeland Security secretaries Tom Ridge and Michael Chertoff, and former Deputy Secretary of Defense Paul Wolfowitz, all three of whom served under George W. Bush.

The list also included some lesser-known names, such as Meghan O’Sullivan, a former national security adviser to George W. Bush, who now teaches at Harvard and is seen as key to Jeb Bush’s idea of lessening U.S. dependence on Middle East energy.