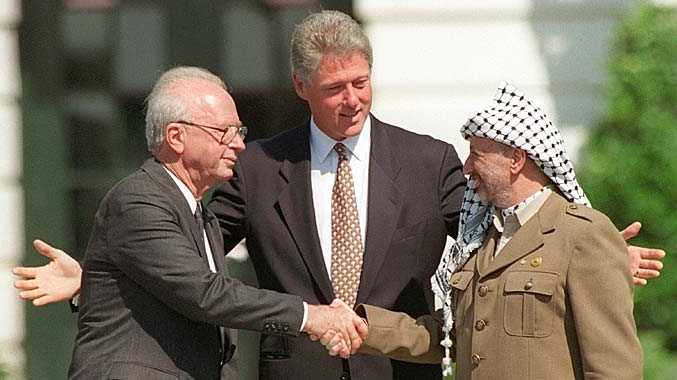 The Palestine Liberation Organization and the Palestinian Authority were the catalysts for a series of terrorist attacks in the early 2000s in Israel that killed or wounded several Americans, a U.S. jury found Monday at a high-stakes civil trial.

In finding the Palestinian authorities liable in the attacks, jurors awarded the victims $218.5 million in damages for the bloodshed. The U.S. Anti-Terrorism Act could allow for that to be tripled.

The case in Manhattan and another in Brooklyn have been viewed as the most notable attempts by American victims of the Palestinian-Israeli conflict to use U.S. courts to seek damages that could reach into the billions of dollars.

The PLO and Palestinian Authority had no immediate comment. None of the victims was in the courtroom Monday for the verdict.

In closing arguments, plaintiff attorney Kent Yalowitz had urged the Manhattan jury to order the PLO and Palestinian Authority to pay $350 million for providing material support to terrorists involved in six bombings and shootings from 2002 to 2004.

No amount could make up for the human toll, he said. “But if the only thing you can give them is money, then money has to stand in as compensation for the unspeakable loss,” he added.

Defense attorney Mark Rochon had argued there was no proof Palestinian authorities sanctioned the attacks as alleged in a 2004 lawsuit brought by 10 American families, even though members of their security forces were convicted in Israeli courts on charges they were involved.

“What they did, they did for their own reasons … not the Palestinian Authority’s,” he said in federal court in Manhattan.

The suit against the PLO and Palestinian Authority and the other against the Jordan-based Arab Bank had languished for years as the defendants challenged the American courts’ jurisdiction. Recent rulings found that they should go forward under the Anti-Terrorism Act, a more than 2-decade-old law that allows victims of U.S.-designated foreign terrorist organizations to seek compensation for pain and suffering, loss of earnings and other hardship.

Jurors heard dramatic testimony from family members of people killed in the attacks and survivors who never fully recovered. One, Rena Sokolov, described how a family vacation to Israel in 2002 turned to tragedy with a bomb blast outside a Jerusalem shoe store.

The Long Island woman testified that she felt like she “was in a washing machine,” and blood flowed so quickly from a broken leg she thought she would die.

“I looked to my right and saw a severed head of a woman about 3 feet from me,” she said.

The plaintiffs also relied on internal records showing the Palestinian Authority continued to pay the salaries of employees who were put behind bars in terror cases and paid benefits to families of suicide bombers and gunmen who died committing the attacks.

“Where are the documents punishing employees for killing people?” Yalowitz asked. “We don’t have anything like that in this case. … They didn’t roll that way.”

He also put up a photo of Yasser Arafat on a video screen, telling the jury that the Palestinian leader had approved martyrdom payments and incited the violence with anti-Israeli propaganda.

Rochon argued that it was illogical to conclude that payments made after the attacks motivated the attackers in the first place.

“You know a lot about prisoner payments and martyr payments,” he said. “Do you have any evidence that they caused these attacks? No.”

Last year, a Brooklyn jury decided that Arab Bank should be held responsible for a wave of Hamas-orchestrated suicide bombings that left Americans dead or wounded based on claims the financial institution knowingly did business with the terror group.

A separate phase of the Brooklyn trial dealing with damages, set to begin in May, will feature testimony from victims.