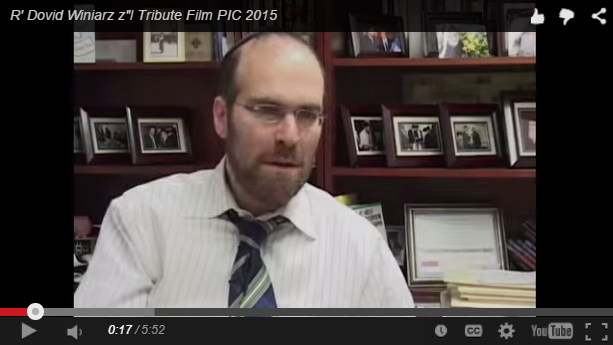 Working at Fidelity may have been Reb Dovid Winiarz’s occupation, but Kiruv and harbatzas haTorah were his vocation. His love for the Jewish people was evident. He bestowed his glowing smile on all, treating everyone with respect, and never judging people.

About a year ago, when he learned that the lady who worked in his local CVS who was Jewish was expecting a baby boy, he started speaking with her about giving the baby a Bris. The lady was touched by Reb Dovid’s genuine concern. At the shiva, she spoke about how deeply she had been moved by Reb Dovid, and announced that at the end of the shiva period, she would avail herself of the kind offer by Rabbi Tzvi Teitelbaum (Reb Dovid’s son in law) and Rabbi Peysach Krohn to perform the bris. Today, this baby boy carries Reb Dovid’s name, the name given to him at his Bris.

The family is launching a campaign to dedicate a Beis Medrash in Reb Dovid’s name. Reb Dovid helped start Yeshiva Zichron Paltiel of Staten Island. In addition to being a founding board member and parent in the school, Reb Dovid did anything and everything for the Yeshiva. The family is launching the campaign to perpetuate his memory by dedicating the Dovid Winiarz Beis Medrash at the yeshiva.