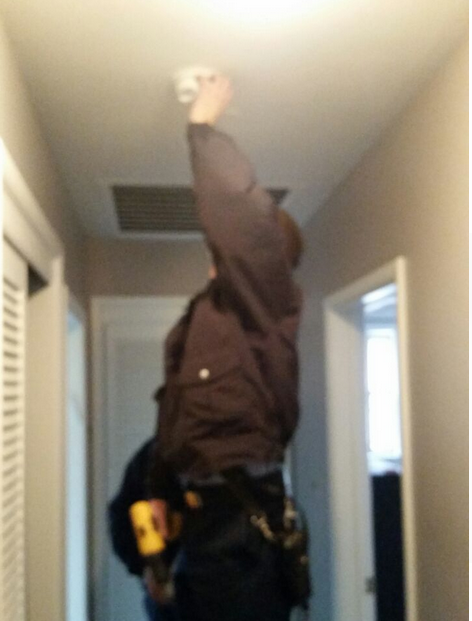 IMAGE CAPTION: Picture of Firefighters installing smoke alarms in the editor’s home. The fire department arrived 30 minutes after being called to install smoke detectors at no charge.

The following was written by  Avraham Cohen

In light of the tragic deaths in Brooklyn this past weekend (seven children R”L killed in a house fire), we should all make sure that our smoke alarms are installed properly and working.

In Baltimore/Maryland, it is ridiculously easy to have this taken care of:

A few weeks ago, just before Daylight Savings Time, I took note that at least one of my smoke alarms was not working.

I called 311 and asked the operator if the Fire Department still had a program where they supplied smoke alarms free-of-charge. She said, yes, they do – but you can no longer pick them up at the fire house; rather, firemen will come to your home and install them (I guess to make sure everything is done properly).

Would I be interested in this program? I said, sure. Would I be home for the next two hours? I answered yes. Fifteen minutes later, a fire truck pulled up in front of the house, and three firemen came in to install two new smoke alarms. It took them five minutes to put them up and they put them in the right places. They were happy to perform this service – a win-win situation for everybody. The new alarms also come with a ten-year lithium battery; good deal.

Check your home/apartment/office now and make sure you are covered! If you already have alarms in place, make sure (1) that they are working (2) that they are placed properly and (3) that you have enough of them – one on each floor. If there’s any question in your mind as to their status, call 311 and have it taken care of. The only down-side to this action is having to explain to your neighbors later what the fire truck was doing parked outside your house!

And if your city/state doesn’t have a smoke alarm program – so how long will it take to go to Home Depot/Target/Walmart and buy some and have them installed? Such cheap insurance and relatively small time input for something so important and critical.

Remember: The life you save may be your own and/or those dear to you. Do it today.