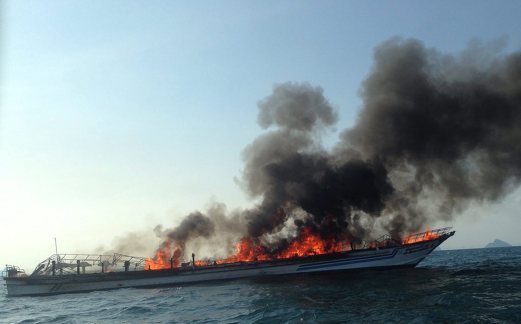 A search team on Thursday found the body of a 12-year-old Israeli girl, the only fatality from a tourist boat that caught fire in the Andaman Sea off the country’s southwest, Thai officials said.

The rest of about 110 passengers, mostly foreign tourists, and crew were rescued Wednesday after the boat sank in flames off the coast of Krabi province.

The girl’s body was recovered by a team of up to 50 navy, marine police and national park officers, who were searching for her since the sinking, Krabi deputy governor Narong Woonchew, who headed the search mission, told The Associated Press.

The girl was vacationing with her parents and was believed to be in the restroom when the fire broke out on the Ao Nang Princess boat, according to the police.

Narong said police were investigating the cause of the fire, which engulfed the ferry that was traveling from Krabi to Phuket, two of Thailand’s most popular beach resort areas.

Photos taken by rescuers, including the Krabi Marine Police, showed the abandoned vessel burning down almost to the waterline before sinking.

Police Col. Sompong Thip-apakul of the Krabi police station said Wednesday that the investigation of the fire would be difficult because the vessel had sunk.

Thailand’s tourist industry, which welcomes more than 20 million people a year, has suffered a black eye in recent years due to domestic political tensions and several high-profile killings and unexplained accidental deaths of Westerners, but serious marine accidents are uncommon.