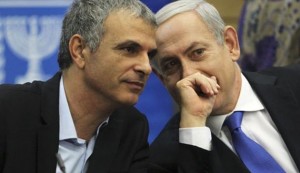 Prime Minister Binyamin Netanyahu met with Kulanu party leader Moshe Kahlon and it appears the two are nearing a deal.

According to Yediot Achronot, officials involved in the negotiations report that a deal was made in principle, one that involves Kulanu receiving the Finance Ministry, Housing Ministry, and the Environmental Affairs Ministry. In addition, Kahlon will be given authority over the Interior Ministry’s Housing Planning Committee, which will permit him to implement his plan for nationwide housing reform. It appears Yahadut Hatorah will maintain control of the powerful Knesset Finance Committee which Kahlon first set his sights on.

Since Kahlon is likely to receive the Interior Ministry committee, PM Netanyahu has to come up with a solution, a consultation prize for Shas’ Aryeh Deri, who hopes to become the interior minister. Yediot reports the consolation package for Deri will include the Ministry of the Economy, Ministry of Galil Development and Jerusalem Affairs.

Shas’ initial reaction is that it expects the Interior Ministry in its entirety, nothing less, however Likud officials involved in the talks feel Shas will come around. The prime minister is leaving Bayit Yehudi and Yisrael Beitenu for last since he is aware relations between him and the party leaders are strained at best.