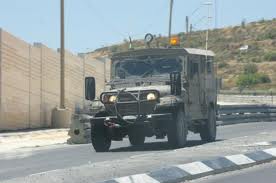 B’chasdei Hashem, the four terrorists working to place a bomb along the N. Israeli/Syrian border on Sunday night 7 Iyar were detected, shot and killed. The bomb was undoubtedly intended for an IDF patrol. The incident occurred near the community of Majdal Shams.

IDF officials confirm they were able to establish without a doubt that the terrorists were busy trying to place the explosive device along the border at approximately 21:30 hours. Soldiers report three of the four were killed while they believe this is so regarding the fourth too.

It is pointed out the incident took place inside Israel, but the terrorists were in the military zone and they did not cross the 110 kilometer border fence.

According to a Channel 10 News report, two of the four terrorists were sons of Israeli Druse terrorist Walid Mahmoud, of Majdal Shams. He was a jailed in Israel for his terrorist activities. The community of Majdal Shams does not hide its loyalty to Syria.

In response, Prime Minister Binyamin Netanyahu stated, “any attempt to harm our soldiers will be met with a firm response, like the one led by the IDF tonight who stopped an attempted terror attack. I praise the IDF alertness which responded quickly and accurately.”