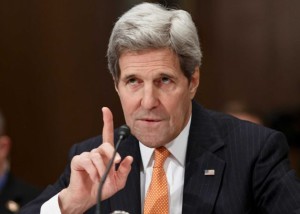 U.S. Secretary of State John Kerry sought to pacify Israeli worries over an emerging nuclear deal with Iran in an interview aired Sunday, dismissing some concerns as brought on by “hysteria” over the possible agreement.

Israeli Prime Minister Benjamin Netanyahu has been one of the harshest critics the U.S.-led framework deal with the Islamic Republic, which offers it sanctions relief in exchange for scaling back its contested nuclear program.

Netanyahu believes the potential deal leaves intact too much of Iran’s contested nuclear program, including research facilities and advanced centrifuges capable of enriching uranium, a key ingredient in building an atomic bomb.

“We will have inspectors in there every single day; that is not a 10-year deal that is forever,” Kerry said. “There is a lot of hysteria about this deal.”

Netanyahu’s criticism has contributed to rising tensions between him and President Barack Obama.

“We think there needs to be a different deal, a better deal, and there are those that tell us this won’t endanger Israel,” Netanyahu said Sunday during a visit by U.S. Sen. Rob Portman, R-Ohio. “I must say as prime minister of Israel, who is responsible for Israel’s security — this does endanger Israel.”