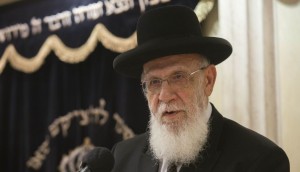 The Shas party Moetzas Gedolei Yisrael convened on Tuesday night 16 Iyar, when the rabbonim shlita were briefed by Aryeh Deri as to the details of the coalition agreement. The rabbonim already gave their approval to the main points of the coalition agreement but they convened to hear the details that were not available earlier. The rabbonim heard words of praise for party leader Deri, who closed the deal with Prime Minister Binyamin Netanyahu.

Council head HaGaon HaRav Shalom Cohen Shlita, who made reference to the “difficult period” during the last years while Shas was in opposition. “I am happy and thank HKBH who merited us to be totally united, “שכולה אגודה אחת”.

Rav Cohen added “We are united as one, as we were when we received the Torah, one heart and HKBH will guide us to do only that which will glorify His Name”.

The council, which convened in Rav Cohen’s home, is expected to convene again this week at which time the decision will be made as to who will receive the respective ministerial, deputy ministerial and Knesset committee appointments allocated to Shas in the coalition agreement.