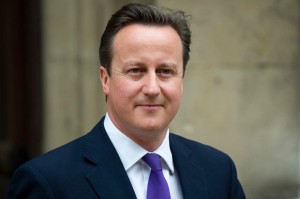 The Conservative Party swept to power Friday in Britain’s parliamentary elections, winning an unexpected majority that returns Prime Minister David Cameron to 10 Downing Street in a stronger position than before.

“We can make Britain a place where a good life is in reach for everyone who is willing to work and do the right thing,” Cameron said. He promised to counter the rise of Scottish nationalism with more powers for Scotland and Wales, saying he would govern as the party of “one nation, one United Kingdom.”

Cameron announced his new government after meeting with Queen Elizabeth II. It came much quicker than expected; pre-election polls had shown the Conservatives locked in a tight race with the opposition Labour Party, raising the possibility of days or weeks of negotiations to form a government.

Labour took a beating, mostly from energized Scottish nationalists who pulled off a landslide in Scotland.

“I’m truly sorry I did not succeed,” Miliband said. “We’ve come back before and this party will come back again.”

With the Conservatives winning an outright majority in the 650-seat House of Commons, the election result looked to be far better for him than even his own party had foreseen. With 643 constituencies counted, the Conservatives had 326 seats to Labour’s 230.

“This is clearly a very strong night for the Conservative Party,” Cameron said early Friday as he was announced the winner of his Witney constituency in southern England.

Labour was routed in Scotland by the Scottish National Party, which took almost all of the 59 seats. SNP leader Nicola Sturgeon told the BBC that the vote represented “a clear voice for an end to austerity, better public services and more progressive politics at Westminster.”

“The Scottish lion has roared this morning across the country,” said former SNP leader Alex Salmond, who was elected in the seat of Gordon.

Cameron’s coalition partner, the Liberal Democrat party, faced electoral disaster, losing most of its seats as punishment for supporting a Conservative-led agenda since 2010. Clegg did hold onto his seat.

Almost 50 million people were registered to vote in Thursday’s election. Votes in each constituency were counted by hand and the results followed a familiar ritual. Candidates, each wearing a bright rosette in the color of their party, line up onstage like boxers as a returning officer reads out the results.

But if the form was familiar, the results were often shocking.

Among the early Scottish National Party winners was 20-year-old student Mhairi Black, who defeated Douglas Alexander, Labour’s 47-year-old foreign policy spokesman and one of its most senior figures. Black is the youngest U.K. lawmaker since 13-year-old Christopher Monck entered Parliament in 1667.

One of the big losers of the day was U.K. Independence Party leader Nigel Farage, who resigned after losing his race. His party ran third in opinion polls, but by early Friday had won only one seat — a casualty of an electoral system in which the candidate with the highest number of votes in each area wins, even if he or she does not gain a majority of votes cast.

Since UKIP’s support is spread geographically across the country — rather than in any single area — it could be runner-up in many places with hardly a foothold in Parliament.

Britain’s economy — recovering after years of turmoil that followed the 2008 financial crisis — was at the core of many voters’ concerns. The results suggest that many heeded Cameron’s entreaties to back the Conservatives as the party of financial stability.

Public questions at television debates made plain that many voters distrusted politicians’ promises to safeguard the economy, protect the National Health Service from severe cutbacks and control the number of immigrants from eastern Europe.

The pound surged as much as 2 percent after exit poll results were released, as investors were reassured that the country would not see days or weeks of uncertainty over the formation of a new government.

Project manager Jonathan Heeley, 42, said it was inevitable that a country struggling to rebuild in the wake of the 2008 financial crisis would be anxious to keep the economic recovery going.

“The country’s rebuilding itself and people want to stay with that,” he said.