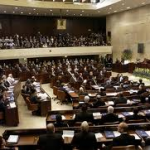 The Knesset on Monday, 22 Iyar, passed the bill permitting Prime Minister Binyamin Netanyahu to increase the size of the cabinet from 18 to 20 in its first reading. The vote passed by a 61-59 margin. The bill also permits the prime minister to appoint ministers without portfolio.

Prior to the vote Yesh Atid party leader MK Yair Lapid said “A year ago I sat at the cabinet table opposite the prime minister and we voted to reduce the cabinet and the prime minister raised his hand in support. Now we have come down to the plenum and voted. While I am a relatively new MK, I took this seriously. The tzibur is asking itself if these laws are mocked then we do not have to take any law seriously”.

Lapid added that this is not just a matter of increasing the cabinet to 20, but it will be more than this and it reintroduces the ministers without portfolio, which simply means one who doesn’t have any work to do. “Everything is dependent on the politics. It is a disgrace to Israeli democracy. There is a contract between citizens and the government by which the citizens’ work and pay taxes and the government works on their behalf. That contract has been violated today”.

Opposition leader MK Yitzchak Herzog pointed out that the Bayit Yehudi party received 160 million NIS for whatever its sees fit and Yahadut Hatorah and Shas received 20 million NIS under the same conditions, 20 million NIS per MK.
Do you know which pharmaceuticals could have been purchased with these sums” he asked, adding “money that could have been allocated for advanced protection on armored personnel carriers or security for Gaza area communities, or to assist kindergartens. 20 million NIS per MK is a record-breaker for political cynicism beyond our imaginations. All towards permitting PM Netanyahu to survive another term as prime minister of the weakest coalition possible”.