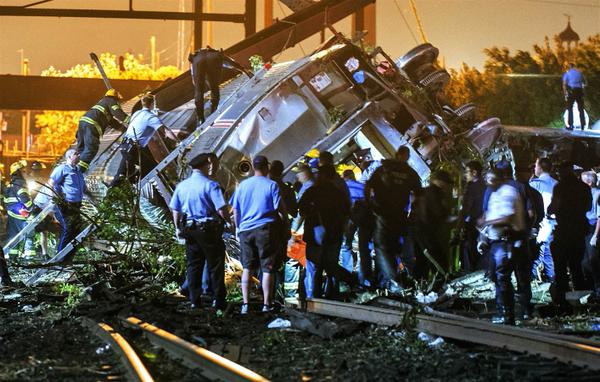 As repair crews work to restore rail service following the deadly Amtrak derailment in Philadelphia, investigators are trying to determine the reason for the train’s acceleration and sorting through conflicting reports about an object striking its windshield.

National Transportation Safety Board member Robert Sumwalt said on CBS’s “Face the Nation” program on Sunday that he wanted to “downplay” the idea that damage to the windshield might have come from someone firing a shot at the train shortly before it flew off the tracks, killing eight people and injuring more than 200 others.

“I’ve seen the fracture pattern; it looks like something about the size of a grapefruit, if you will, and it did not even penetrate the entire windshield,” Sumwalt said.

Officials said an assistant conductor on the derailed train said she heard the Amtrak engineer talking with a regional train engineer and both said their trains had been hit by objects. But Sumwalt said the regional train engineer recalls no such conversation, and investigators had listened to the dispatch tape and heard no communications from the Amtrak engineer to the dispatch center to say that something had struck the train.

“But, nevertheless, we do have this mark on the windshield of the Amtrak train, so we certainly want to trace that lead down,” he told CNN’s “State of the Union.”

Investigators remain focused on the acceleration of the train as it approached the curve, finally reaching 106 mph as it entered the 50-mph stretch, and only managing to slow down slightly before the crash.

“The only way that an operable train can accelerate would be if the engineer pushed the throttle forward. And … the event recorder does record throttle movement. We will be looking at that to see if that corresponds to the increase in the speed of the train,” Sumwalt told CNN.

The Amtrak engineer, who was among those injured in the crash, has told authorities that he does not recall anything in the few minutes before it happened.

Meanwhile, almost 20 people injured in the train crash remain in Philadelphia hospitals, five in critical condition but all expected to survive.

Sumwalt said the agency had long called for inward-facing video cameras on trains which he said would help provide crucial information about such crashes. And he said the kind of next-generation speed control systems that Congress has ordered installed by the end of the year could have prevented countless accidents over the years. The systems use transponders, wireless radio and computers to prevent trains from going over the speed limit.

Amtrak has said it expected to restore limited service between Philadelphia and New York on Monday, with full service resuming on Tuesday. Amtrak officials did not immediately return messages from The Associated Press seeking an update Sunday.

The Federal Railroad Administration on Saturday ordered Amtrak to expand use of a speed-control system long in effect for southbound trains near the crash site to northbound trains in the same area. The agency also ordered the company to examine all curves along the Northeast Corridor, the busy stretch of tracks between Washington and Boston, and determine if more can be done to improve safety, and to increase speed limit signs along the route. Amtrak said it would immediately comply with all of the directives.