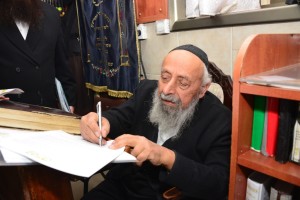 HaGaon HaRav Shimon Ba’adani, a member of the Shas party Moetzas Gedolei Yisrael, has in the past released harsh statements pertaining to the dati leumi camp and its leaders. This time however he had a different tone regarding the Bayit Yehudi party leader, now a coalition partner.

Rav Ba’adani spoke with Kol Chai Radio and addressed a number of issues including the recent coalition negotiations. The rabbi said that Shas did the best it could in the negotiations, adding “I don’t measure the Siyata Dishmaya but to the best of my understanding, we were very successful. B”H they received the maximum they could in the coalition negotiations. We are not in a position to achieve everything for the Torah world only” the rav stated.

Rabbi Ba’adani addressed the machlokes between the chareidi tzibur and the general Israeli population. “I believe that as much as the Torah will increase there will be an increase in Siyata Dishmaya. I believe regarding all the efforts to break us – we endured – and with HKBH’s assistance and the merit of the Torah we will solve all our problems” he added.

He explained how Shas’ shluchim, the MKs and ministers adhere to the words of the Torah Council. “Daas Torah is what is important to us and this brings hatzlacha…All the shluchim are bnei Torah and their efforts are for the Torah”.