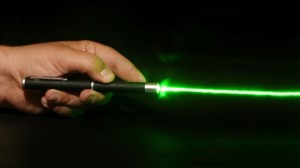 A student in Sligsberg High School has lost his eyesight in his left eye as a result of a laser that was directed at him. The parents of the young man are suing the city.

Attorney Yaron Moiel is representing the young man in the Jerusalem District Court case, claiming both the Jerusalem Municipality and the Ministry of Education are responsible due to negligence. Doctors have informed the victim and his family that the sight in his left eye is gone forever and today’s technology does not leave hope of an improvement down the road. The incident occurred in January 2014, a time when many students would arrive in school with laser pens which one can buy in stores around the city. During recess the students would play with the lasers.

In one case a friend directed the laser at the victim. A short time later he explained he felt heat and pain in his eye along with blurred vision in his left eye. According to the indictment he did not pay attention to the eye for ten days, and only told his mother when he lost the sight in the eye. Doctors in Hadassah Ein Kerem Hospital made the diagnosis.