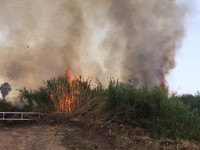 14:12 IL: Four firefighting planes were summoned to assist Jewish National Fund firefighters and Central Galil district firefighters as a fire raged out of control in a forestry area of Kibbutz Genosar on Monday afternoon, 21 Sivan.

First reports of the blaze arrived at about 13:00, and Tiveria firefighters were dispatched. Due to the heatwave on Monday and the extremely dry conditions, the blaze spread rapidly and it was still out of control and continuing to spread about 90 minutes after the first call. B’chasdei Hashem there are no reports of injuries at this time.

14:51: The hot and dry conditions resulting from today’s heatwave have resulted in numerous blazes. Temperatures in the capital are in the high 90s F.

Beit Shemesh firefighters are responding to a large blaze in the Mevo Betar area along with two firefighting planes. Access to that blaze is extremely difficult JNF officials report.

Three fire apparatus and volunteers are battling a large brush blaze in Shomron near Emanuel. The fire is dangerously close to homes on Chassam Sofer Street and efforts continue to prevent the blaze from hitting homes.

15:12: Regarding a blaze near Tzur Hadassah, the fire hit an electric line and it collapsed into the forest. Six fire apparatus have been dispatched from Beit Shemesh along with two planes and firefighters from JNF and Israel Electric. Police and other agencies are also operating in the area. At present there are no dangers to area residents, the Beit Shemesh Fire Service spokesman reports.

16:37: The fire in the Tzur Hadassah area has been declared under control B”H.