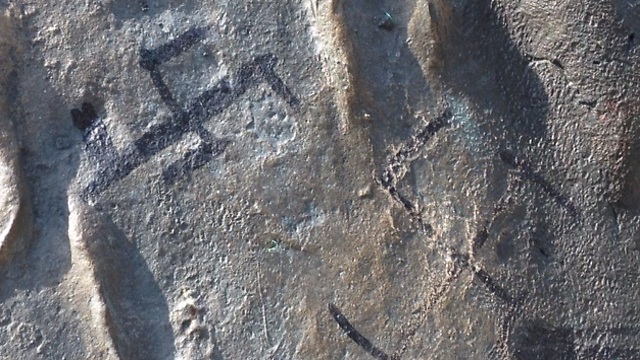 When the “Shorashim” delegation went to pay a respectful visit on Monday at the mass killing site of Babi Yar, its members could not believe what they found: a few graffiti swastika were sprayed on the great Menorah memorial. Rabbi David Stav of Tzohar Rabbonim remarked “We came here to facilitate the aliyah to Israel of the Jews of Ukraine fleeing from battle zones by the ‘Shorashim’ initiative. The swastikas have increased our resolve and sense of urgency to keep promoting the activity in which we are engaged”.

This is not the first time the site was desecrated by anonymous anti-Semites. Last September swastikas and malicious graffiti were sprayed over the memorial, days before the 73rd commemorative ceremony to the Nazi spree which took place there and ended the lives of over 100 thousands Jews in September 1941. The Menorah memorial was places there at 1991, after years of refusal on behalf of Soviet authorities to mention the Jewish origins of the victims.

A delegation of “Shorashim” came to Ukraine this Monday, escorted of senior rabbis, social activists and journalists in order to inaugurate its new office in Dnipropetrovsk. “Shorashim” was established by the “Triguboff Fund” and “Tzohar” in order to aid Jews in Israel to prove their Jewish ancestry before making aliyah. The delegation met during its stay with local rabbis, youngsters and old members of the Jewish community, the Israeli ambassador and more. It also visited the tziyun of Rav Nachman in Uman, various shuls and the Babi Yar Menorah memorial, where they found it mutilated.

The new “Shorashim” office in Dnipropetrovsk is to prepare the newcomers to life in Israel, and to guide and counsel them in all aspects of their personal legal status in their new state. Non-Halachic Jews will be given information about giyur options and will start the orthodox procedure, while Halachic Jews will be asked to collect their ancestral documents and certificates to prove their Jewish lineage to the Chief Rabbinate as required in Israel. This shall prevent entangling situations of inability to prove one’s Judaism which tend to become more complex once emigrating and leaving and all documents and material possessions behind and afar.

Shalom Norman, CEO of the Triguboff Institute, said that “If the Holocaust, represented in this horrible place, had not occurred, the Jewish people would have now amounted to 30 million. This is why we must primarily bring back those who remained here to the bosom of Judaism by bringing them to Israel and clarifying their personal status so the loss of more Jews would be prevented. This cross over the Babi Yar memorial is a reminder that we must carry with us of a grim reality despite the freedom and strength the Jewish community in Ukraine benefits from today”.