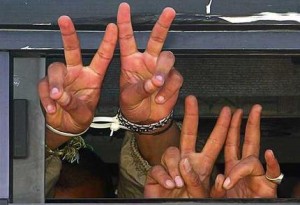 Islamic Jihad terrorist Khadir Adnan is being held by Israel in administrative detention, which means he is not charged with a crime but incarcerated under Israel’s emergency laws to prevent terror attacks. Adnan will most likely be released in two weeks.

The announcement of his release brings an end to his 55-day hunger strike. The 36-year-old terrorist is reportedly “near death” as a result of his hunger strike.

Adnan held a hunger strike in 2012 as well as he tried to call attention to the plight of administrative detainees. That time the hunger strike continued for 66 days.

He was detained in July 2014 and when his six-month prison term was extended by four months, he decided to launch the hunger strike to protest Israel’s use of administrative detention.