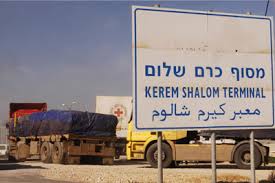 While Israel is under constant criticism regarding its continued control over Gaza passages and the marine blockage, Israel explains that 2015 will bring a new record regarding the amount of trucks crossing into Gaza carrying supplies via the Kerem Shalom Crossing; 140,000. According to officials, this is twice the number of trucks that passed through the crossing in 2014. It is also reported that since January 1, 2015, over 250 attempts at smuggling prohibited materials into Gaza were intercepted.

The Ministry of Defense Crossings Authority, which maintains authority for crossings from S. Israel to Gaza as well as crossing in Yehuda and Shomron, released some facts and figures marking one year since Operation Protective Edge.

The numbers pertaining to two crossings from southern Israel into Gaza signal a sharp increase in the flow of supplies to Gazans. There has been a 93% increase as compared to the previous year and officials’ state by the end of 2015, there will have been 140,000 trucks passing into Gaza, an average of 600-650 daily. This is almost twice the number prior to Protective Edge.

Security agents have a difficult job, a responsibility to constantly monitor and inspect in the hope of detecting prohibited cargo, which includes electronic components used in explosives, materials for the manufacture of rockets and more. Over 250 smuggling attempts were detected at Kerem Shalom since the beginning of 2015, more than all of 2014. The experts expect that number will pass the 500 mark by year’s end.