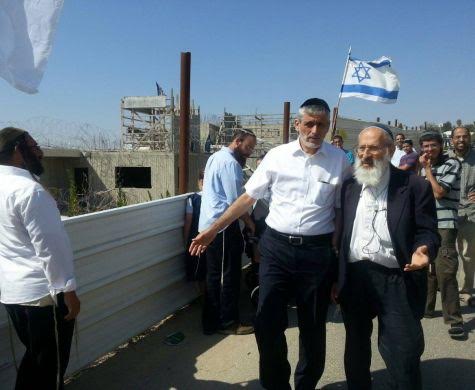 Yachad party leader Eli Yishai was among the public officials visiting Beit El on Tuesday, 12 Menachem Av, as police evacuated residents from the Beit Dreinoff complex ahead of the demolition of the buildings in line with a High Court of Justice order. Among the cabinet ministers and public officials who arrived in a showing of support for residents was Yishai, who explained other than the homes of terrorists, Israel should not be razing homes.

Yishai explained that during his tenure as Minister of the Interior, he regularly moved ahead with legislation to circumvent similar High Court rulings. He added that too often the state does not destroy homes that must be destroyed but sadly when it comes to Beit El, we see a different reality, concluding if the High Court truly wishes to fly the flag of equality than it cannot continue a policy of discrimination.

He added “When the Knesset wishes to, it legislates legislation within 48 hours to circumvent the High Court”, stating the same legislation that was intended for the Ulpana neighborhood of Beit El, which fell to the wayside amid promises from Prime Minister Netanyahu to build 300 additional housing units in Beit El, which has yet to occur.