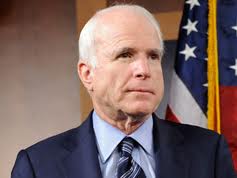 The Republican chairman of the Senate Armed Services Committee is blasting the Iranian nuclear deal, saying the agreement paves the way for Iran to develop an atomic weapon and gives the country billions of dollars for a “shopping spree” on the international arms market.

Sen. John McCain of Arizona criticized the deal at a hearing on Wednesday. At year five, he says, Iran will be free to acquire fighter aircraft, attack helicopters and warships. McCain says that at year eight, Iran will be able to acquire material for more sophisticated ballistic missiles.

Defense Secretary Ash Carter defended the deal, saying it is only one part of the U.S. strategy and that America is moving “full speed ahead” to confront Iran and the Islamic State’s malign activities in the region.