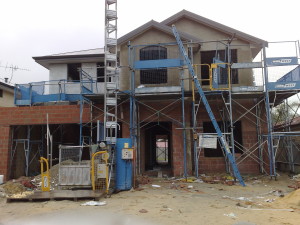 Home construction is up, both locally and across the nation. Locally, many contractors are building homes to spec for Orthodox Jewish families, with dual ovens, dual sinks, Pesach kitchens and even built-in Sukkah breakfast nooks. But what happens if one of these contractors also builds it on Shabbos?

The Shulchan Aruch (OC 244:3) writes that if a house was built on Shabbos, it is proper never to enter it for as long as it stands. This is true whether the house was built by Jews or by gentiles upon the instruction of Jews. It is interesting to note that this is a recommendation and not a bottom line halachic ruling.

The Mishna Brurah (244:21) adds that this applies not just for the Jewish family that the home was built for, but for any Jewish person.
In halachic terminology, the byproduct of work performed on Shabbos is called, “Maaseh Shabbos.” There are two types of Maaseh Shabbos – those byproducts of Shabbos violation that were created by Jews and those that were created by gentiles.

The Talmud (Ksuvos 34a) records a debate regarding Maaseh Shabbos created by a Jew. Rav Acha and Ravina argue as to whether Maaseh Shabbos is forbidden by Torah law or by Rabbinic law. The final halacha is that it is forbidden only by Rabbinic law.
What is the reason for the prohibition? One reason is that it is a means to prevent future or further Shabbos violation. Another reason is that the prohibition will serve to further our appreciation of the gift that is Shabbos.

To better understand this, an analogy may be in order. The United States of America, the State of Israel, and every nation in the world has a flag that its citizens respect and venerate. The nation of Israel also has such a flag, the oldest of any other group or nation. That flag is Shabbos, described in the Torah as an “Os” – a sign. The prohibition of Maaseh Shabbos serves to imbue the Jewish nation with veneration and respect for the Os that is Shabbos.

The Gemorah (ibid, Chulin 15a, and Bava Kamma 71a) further records a debate between the Tannaim as to the parameters of the prohibition. The two categories under discussion are:

1] when Shabbos was violated by accident – B’Shogeg and

2] when it was violated intentionally – B’Maizid.

The three views are found below:

Rabbi Yehudah is of the opinion that one may never benefit from a Shabbos violation on Shabbos itself and one must wait until Moztei Shabbos even if it was done unintentionally – B’Shogaig. If it was done on purpose, however, the person who did it can never use it. It is forbidden FOREVER.

Rabbi Yochanan HaSandlar states that B’Shogaig, others may eat of it on Motzei Shabbos, but never for the Shabbos violator. B’Maizid, however, it is forbidden forever for everyone – neither he nor Acherim – others.

In accordance with which of the above opinions do the Rishonim rule?

The Rambam, Rif and the Shulchan Aruch rule like Rabbi Yehudah. For the Shabbos violator the Maaseh Shabbos is forbidden forever and for everyone else it only becomes permitted on Saturday night.

Tosfos and the Vilna Gaon, however, rule more leniently. They rule like Rabbi Meir who permits everything on Saturday night and does not forbid it at all if it was done B’Shogaig. None of the Rishonim rule in accordance with Rabbi Yochanan HaSandlar, however.

How does the Mishna Brurah, which is generally considered to be the final word in halacha, rule? He rules (318:7) that when it is l’tzorech – when necessary, one may rely upon the Vilna Gaon when the Shabbos was violated B’Shogaig. What about when it was violated on purpose? The Mishna Brurah does not state that one can rely on the Vilna Gaon’s opinion in such a case. The clear indication is that in cases of intentional Shabbos violation, the Mishna Brurah rules stringently.

BACK TO THE HOUSE

Getting back to the ruling regarding the building of a house, it seems that the Shulchan Aruch is advocating a much stronger position. The Shulchan’s recommendation is to follow neither Rabbi Yehudah or Rabbi Meir mentioned above. Why is that the case?

The rationale for this much stronger prohibition lies in the fact that a house is considered to be very, very public – befarhesia. Otherwise it would not be as stringent. Clearly we see, how seriously we must take the violation of Shabbos through another party when it is so public and permanent an item.
Although it is proper not to live in such a house or use it, it would be permitted to derive benefit from the house by selling it, according to the Mishna Brurah.
The Poskim have written, however, that if the Jew contracted with the gentile not to work on Shabbos and made every effort to stop him from doing so, then he should not be punished by the fact that the gentile did it against his instruction. (See Piskei Teshuvos note 244).

How long does the recommended prohibition remain in effect? It seems that it is as long as the work on that house was not redone, one should avoid buying it or renting it. It seems, however, that other than within the sharp memory of various members of a Jewish community, no records are kept as to which homes were built for Jews on Shabbos.