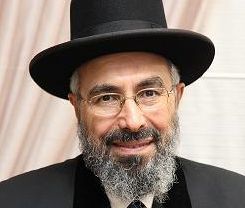 Chief Rabbi of Kiryat Ono Rabbi Dr. Ratzon Arussi has joined the growing list of prominent dati leumi rabbonim opposed to the formation of Giyur K’halacha, the independent beis din for giyur that permits circumventing the Chief Rabbinate of Israel.

Rabbi Arussi begins by questioning if the rabbonim who launched the new beis din insist they are only going to convert people in accordance with halacha, then what could the machlokes be with the Chief Rabbinate of Israel. He adds that it is stated there are 300,000 former immigrants from the former Soviet Union who are married and one member of the couple is not Jewish. Since it is explained they cannot remain in this status and must undergo conversion, and since all are in agreement the conversion must be halachically acceptable, the question remains as to what the minimum halachic demands are to make these people Jewish.

Rav Arussi adds that all are in agreement that a minor who has not yet reached the age of mitzvos may be converted and when the child reaches that age, s/he does not reject the giyur, the conversion is valid and s/he is Jewish and if the child rejects it then the giyur is no longer valid.

Rav Arussi adds there is however a bigger machlokes, and that is if we can accept the fact the parents promise to place the child in a religious school. “How does one guarantee they do not take the child out of the school? After all, there is no monitoring system. This could lead to a situation in which a demand was made and it was met, albeit for a short period of time, and this would result of the child being a convert on paper only and not a true convert” he adds.

“Let’s assume that they put him in a religious school. What education will this child receive when his non-Jewish mother’s home teaches him the opposite of what he is learning? What will be the outcome? When there is a situation when parents are not religious and the child attends a religious school, the odds are the child will not truly understand what Torah and mitzvos are and we have simply deceived ourselves. This is not a question of leniencies and stringencies. The situation as it stands compels us to ask if under the circumstances permit creating a situation of true acceptance of Torah and mitzvos. Some say acceptance of Torah and mitzvos is not a condition of becoming a convert, backed up by the Rambam but after asking mechila one must know how one has to learn Rambam.

The rav points out that in Halacha Beis the Rambam writes

He adds there is the halachic giyur and the essence of giyur. The essence is that a person wishes to accept Torah and mitzvos and the halachic giyur is the actual process, the tevila, mila and korban and it is certain that a child must complete the entire process and accept the yoke of Torah.

“We may not deceive ourselves, especially here in a nation founded by Zionist Jews that wished to establish a non-halachic state. We admire and respect all they did but one who believes the redemption will come on the Zionist vision that has replaced Yahadut is sadly mistaken. There cannot be a greater national disaster.

“I have no doubt that Rabbi Nachum Rabinovitch is acting L’Shem Shomayim as he is not involved in politics in any way. But because of his lack of involvement in politics he remains unaware of the political trends hiding behind this.

“We merited one state Chief Rabbinate but we have brothers who are far from Torah and mitzvos. If we do not know how to bring them close don’t do it by disassembling the giyur mechanism which will recognize what Jewishness is and if they wish to become Jews or not”.

The rabbi concludes by stating “The respected rabbonim must pay attention as their intentions are desirable while there actions are undesirable. Regarding giyur, this is a recipe for assimilation. In a day or two when they will want to get married, these very same rabbonim will check into their conversions and realize it how they were living and they will not marry them and this will lead to a major disappointment and a hate for religion”.