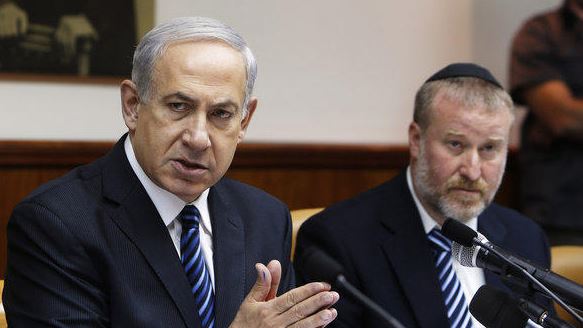 The selection committee which is responsible for suggesting suitable candidates to become Israel’s next Attorney General is recommending Cabinet Secretary Avichai Mandelblit, who would replace Yehuda Weinstein. The chairman of the committee, retired Supreme Court President Justice Asher Grunis is adamantly opposed to Mandelblit’s appointment.

Dr. Avichai Mandelblit, a shomer Shabbos Jew, is a retired IDF Major-General, having served in the Military Prosecutor’s Office. A second name put forward by the committee is Justice Minister (Bayit Yehudi) Ayelet Shaked, who is an expert in criminal law. However, of all the candidates discussed by the committee, the only one to receive the required four votes is Mandelblit, who is a close ally to PM Netanyahu, serving as his cabinet security today.

Despite the harsh objections of the committee’s chairman, the recommendation has been given to Prime Minister Binyamin Netanyahu.

It is already mentioned in the mainstream media that if appointed, Mandelblit would become the fourth shomer Shabbos candidate recently appointed to a major position, following the heads of the Mossad, ISA, and Israel Police.