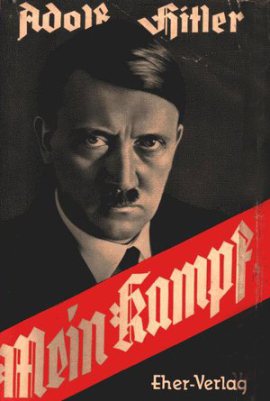 For 70 years since the Nazi defeat in World War II, copyright law has been used in Germany to prohibit the publication of “Mein Kampf” — the notorious anti-Semitic tome in which Adolf Hitler set out his ideology.

That will change next month when a new edition with critical commentary, the product of several years’ work by a publicly funded institute, hits the shelves.

While historians say it could help fill a gap in Germans’ knowledge of the era, Jewish groups are wary and German authorities are making it clear that they still won’t tolerate any new “Mein Kampf” without annotations.

Under German law, a copyright expires at the end of the year 70 years after an author’s death — in this case, Hitler’s April 30, 1945, suicide in a Berlin bunker as the Soviet army closed in. That means Bavaria’s state finance ministry, which holds the copyright, can no longer use it to prevent the work’s publication beyond Dec. 31.

The book has been published in several other countries; in the U.S., for example, Bavaria never controlled the copyright.

In Germany, many argue that holding back “Mein Kampf” merely created mystique around the book. The idea of at least a partial version with critical commentary for the German market dates back as far as the late 1960s. The Munich-based Institute for Contemporary History, which is behind the new version, sought and was denied permission to produce the book in the mid-1990s when it published a volume of Hitler’s speeches.

Hitler wrote “Mein Kampf” — or “My Struggle” — after he was jailed following the failed 1923 coup attempt known as the Beer Hall Putsch. Millions of copies were printed after the Nazis took power in 1933.

The rambling tome set out Hitler’s ultranationalist, anti-Semitic and anti-communist ideology for his National Socialist German Workers Party, or Nazi party, airing the idea of a war of conquest in eastern Europe.

“The book should not be underestimated as a historical source and also as a key to understanding the history of National Socialism,” the director of the Munich institute, Andreas Wirsching, said ahead of the new edition’s mid-January publication.

“Among serious historians in Germany, you won’t find one who is against a commented edition and hasn’t been calling for one for years,” said Sven Felix Kellerhoff, a journalist with the daily Die Welt and a historian who has written about “Mein Kampf” himself. “That goes from conservatives to the left.”

Jewish opinion varies. The head of Germany’s Central Council of Jews, Josef Schuster, says that knowledge of “Mein Kampf” is important in explaining Nazism and the Holocaust — so “we do not object to a critical edition, contrasting Hitler’s racial theories with scientific findings, to be at the disposal of research and teaching.”

One of his predecessors is more critical. Charlotte Knobloch, a Holocaust survivor who heads Munich’s Jewish community, says she trusts the expertise of the institute’s researchers but doubts that the new edition will achieve its aim of “demystifying and taking apart ‘Mein Kampf.'”

It is likely to awaken interest “not in the commentary, but the original — and that remains highly dangerous,” Knobloch said. “It could still have an impact because both of the core ideas are timeless: ultranationalism and racism.”

Given that “Mein Kampf” is already widely available in university libraries and on the internet, “we don’t see a need to print more copies of it and thus ensure mass distribution, including of an annotated version,” said Ronald Lauder, president of the World Jewish Congress.

The publishers say they understand the objections, while noting that the book is already freely available secondhand and online, not to mention in other languages, without annotations. Christian Hartmann, who led the team putting together the heavily annotated version, says that “we are linking Hitler’s text and our commentary firmly together — we are practically encircling Hitler with our remarks.”

Hartmann said they have attempted “the most intensive examination and rebuttal that is possible” of “Mein Kampf.”

Amid disagreement over the annotated edition’s merits, there is wide agreement that Hitler still shouldn’t be left to speak uncontradicted.

In mid-2014, Germany’s federal and state justice ministers agreed that new editions without commentary should continue to be prevented after the copyright expires, likely using laws against incitement.

It remains to be seen whether their resolve will be tested. There are currently no known plans to publish a Hitler-only “Mein Kampf” in Germany.

After the end of World War II, the Allies turned over what remained of Hitler’s assets — the Nazi leader was officially registered as living in Munich — to the Bavarian government. Those included the copyright of the German original of “Mein Kampf.” Authorities in Munich subsequently ensured it wasn’t republished, though there was no official ban on the book.

That use of the copyright “of course had its reasons,” Wirsching said. In the early years of West Germany, “there were any number of Hitler admirers; there wasn’t just neo-Nazism, there was also old Nazism.”

But “this is a different generation, a different political culture, a solid political democracy that in my view can definitely withstand an edition with commentary.”

That Bavarian government took the same view when, in 2012, it said it would put 500,000 euros ($545,000) into backing the project and was even considering a version specifically aimed at students. But the following year, governor Horst Seehofer did an about-turn, arguing that supporting publication of “Mein Kampf” didn’t fit with Bavaria’s participation in a drive to have modern Germany’s main far-right party banned.

However, the Institute for Contemporary History insisted that it would go ahead, Bavarian officials then indicated that they wouldn’t object, and the researchers didn’t have to return the funding.

The new edition of “Mein Kampf,” which has expanded to nearly 2,000 pages with the Munich institute’s commentary, roughly double the length of the original, doesn’t appear likely to fly off the shelves. With a print run of up to 4,000 copies, it costs 59 euros ($64).

There won’t be an e-book, since the edition’s layout can’t be adapted to the format, but publishers are considering an online edition, perhaps in 2017.

Any proceeds will go to charity, Wirsching said, but given the costs of dedicating historians to the task and producing the voluminous tome, he doesn’t expect any.

“In the end, I think this will be an entirely nonprofit enterprise,” he said.