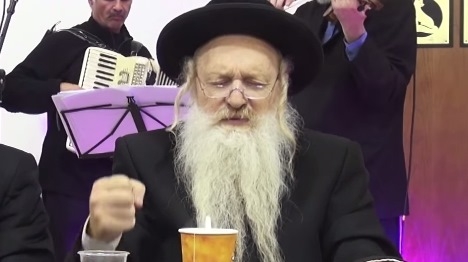 Rabbi Daniel HaKohen Stavsky was mesader keddushin at the controversial wedding which was the subject of the recent Channel 10 News report. The report showed dozens of mesamchim dancing while praising the fatal attack in Duma and shouting “nekama” (Revenge). The attack claimed the lives of three members of an Arab family and as led to widespread condemnation of the right-wing and religious communities.

Ynet quotes the rav explaining that this act, which is being attributed to Jews, was in fact carried out by Arabs together with members of the Jewish Unit of the ISA (Israel Security Agency – Shin Bet) and the ISA is now working to pin the heinous act on innocent Jews using unacceptable means including physicial torture and sleep deprivation.

The report adds Rav Stavsky, who is viewed by many as the rav of the so-called ‘Hilltop Youths’, remained at the wedding while the distasteful dancing including shouts of revenge took place.

The report adds the rabbi announced that ultimately, it will be revealed to all that Arabs perpetrated the arson attack and not Jews and this revelation will lead to great disappointment among the agents of the ISA’s Jewish Unit.

Rabbi Stavsky is no stranger to controversy, and is a member of the recently formed “Sanhedrin” which brought to to judgementPope Francis and US President Barack Obama in absentia. The rabbis called the two leaders to trial for crimes leading to the mortal endangerment of Israel and the Jewish nation.
Wedding video: