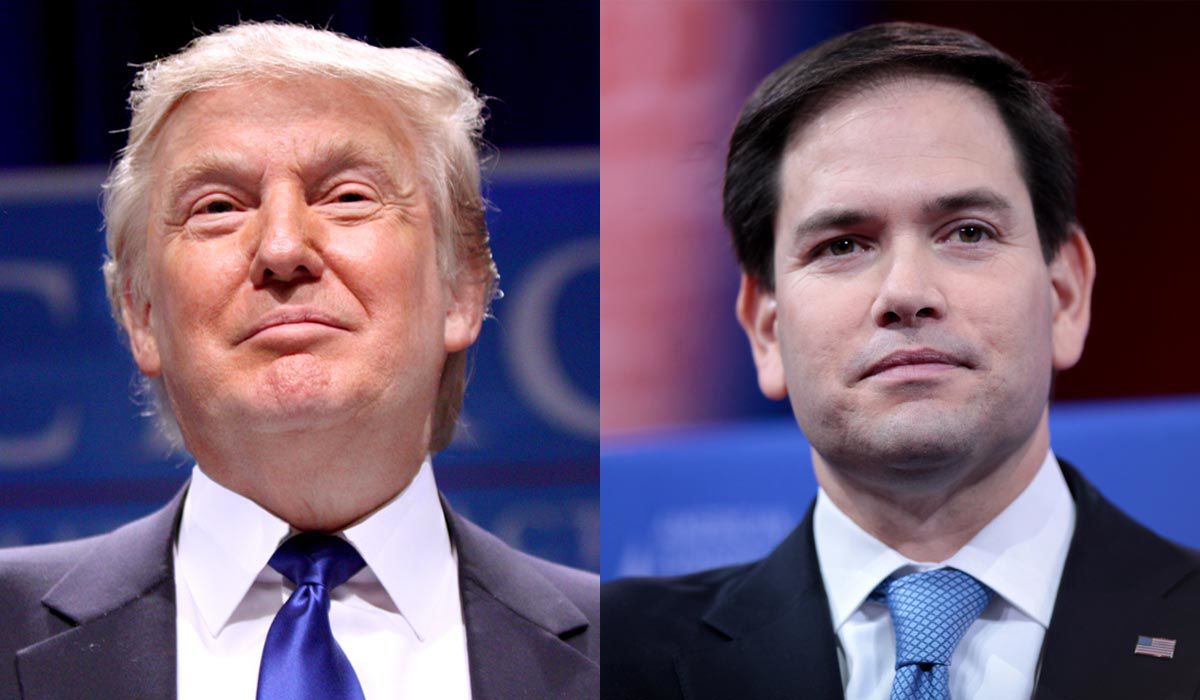 Donald Trump is in a tight contest with Marco Rubio in the Florida senator’s home-state Republican presidential primary, according to a new Washington Post-Univision News poll.

The Florida Republican primary next Tuesday is a must-win for Rubio, who has suffered through a string of humiliating losses in recent days that yielded him no delegates. He trails Trump and Cruz in the delegate race but has vowed to stay in the race even if he loses his home state.

Across Florida, Republican support divides along gender, racial and generational lines. Trump holds a double-digit edge over Rubio among white voters (42 to 28 percent), while Rubio leads Trump by 49 to 20 percent among Hispanic Republicans, with Cruz at 20 percent. Trump leads Rubio among older voters, while they are nearly tied among those under age 50 (37 percent for Trump vs. 35 percent for Rubio). And Trump holds a 13-point lead among men (42 to 29 percent) while he and Rubio are about even among female Republican voters, 35 percent for Trump and 33 percent for Rubio.

A majority of Florida Republicans, 59 percent, think Rubio should bow out of the presidential campaign if he does not win the state’s primary; 33 percent say he should keep running.

The poll was taken March 2 to 5, preceding Rubio’s losses Saturday night in Kansas, Kentucky, Louisiana and Maine. On Sunday, he won the Puerto Rico GOP primary, but placed third or fourth Tuesday night in Hawaii, Idaho, Michigan and Mississippi. Those losses could be a factor for voters when deciding whether Rubio’s candidacy is viable.

The survey was also taken just as several political groups began airing tens of millions of dollars in attack ads against Trump, targeting his business practices and caustic rhetoric. But Florida Republicans have largely favorable opinions of Trump.

Over half, 57 percent, view the New York businessman favorably, compared with 39 percent who view him unfavorably. Rubio is seen in a slightly more positive light, with 62 percent rating him favorably while 31 percent view him unfavorably. And while 24 percent find Trump “very unfavorable,” only 13 percent say the same of Rubio. Cruz is also viewed positively by 56 percent of Florida voters, compared with 35 percent who are unfavorable toward him.

Looking specifically at different candidate attributes, Florida Republicans rate Trump as having the best chance compared with Rubio and Cruz of being elected president in November (60 percent) and the candidate who could best bring needed change to Washington (55 percent). By a smaller margin, Trump edges out Rubio on who is closest to them on the issues (39 percent for Trump; 32 percent for Rubio).

But Rubio is seen more positively than Trump is on some other attributes: He leads Trump by 13 points and Cruz by 14 points as the candidate with the best personality and temperament to serve as president. Roughly similar shares pick Rubio and Trump as the most honest and trustworthy candidate (34 percent vs. 30 percent), while 21 percent say this of Cruz.

One of Trump’s mainstay issues, temporarily banning Muslims who are not U.S. citizens from coming into the country, is supported by a majority of Florida Republican likely voters. In all, 57 percent support banning Muslims, and that support is strong – 39 percent “strongly support” such an action, while 17 percent are strongly opposed.

The issue of Cuba resonates in Florida like no other state. President Obama plans to visit the island nation this month, making him the first sitting president to do so in 88 years. In Florida, 59 percent of all Republicans disapprove of Obama’s visit. Notably, 66 percent of Florida’s Hispanic Republicans agree that Obama should not visit Cuba. A bare 51 percent majority supports for the “wet foot, dry foot” policy allowing Cuban refugees to stay in the United States if they reach the shores of the country – no surprise in a state where the Hispanic population is predominantly Cuban.

Meanwhile, a majority of Florida Republicans, 72 percent, think the Senate should delay a vote on a replacement for the late Justice Antonin Scalia until the next president takes office. And a majority, 62 percent, oppose providing financial assistance to Puerto Rico to avert a default on its debt. Here, Hispanic Florida Republicans are split: 41 percent support assisting Puerto Rico financially while 44 percent oppose such action.

Florida Republicans cite jobs and the economy as the most important issue when deciding their vote (43 percent) followed by terrorism (27 percent) and foreign policy (8 percent). Immigration (6 percent) ranks farther behind. Most of the state’s Hispanic population is either Cuban or Puerto Rican, two groups less affected by immigration policy, since Puerto Ricans can easily migrate from the island territory and federal law grants protections to Cuban immigrants who reach the United States.

Rubio’s decision not to run for reelection has sparked a crowded race to succeed him, with contested primaries on both sides of the aisle.

This Washington Post-Univision poll surveyed a random sample of 450 likely voters ahead of Florida’s March 15 Republican primary, including interviews on land-line and cellular phones. The survey included an oversample of Hispanic likely voters, which were weighted back to an estimate of their share of the primary electorate. The margin of sampling error is plus or minus 5.5 percentage points for overall results; the error margin is 9.5 points for results among the sample of 164 Hispanic likely voters.

The survey was conducted by the independent firm Bendixen and Amandi International and the Tarrance Group, a Republican firm.